Childhood is the subject of this antique fireplace, entirely carved in high relief in the Statuary marble. Three groups of children illustrate immemorial games: the swing, Blind Man’s Bluff and finally Hot Cockles. Playing among vines, these putti have been imagined in the line of Children Bacchanalia representations from Renaissance. These games, which were already played in Antiquity, the nakedness of bodies, and finally the theme of childhood, immerse us into a vision of the golden age, a mythical time still spared from toil and corruption.
The structure of our fireplace, abandoning the styles of the 18th century, has an organic appearance, reminiscent of Nature. An extremely rare and original piece, this fireplace comes from the area of Genoa, in Italy and was realized in the late 19th century.

These putti playing in vines remind us unequivocally of the Bacchanalia of putti iconography which developed as early as the sixteenth century. Instead of the procession of Satyrs and Maenads, Renaissance artists like Titian represent toddlers, among vine branches, playing with goats and drinking wine. In sculpture, François Du Quesnoy has established himself as an inescapable reference of these Bacchanalia of putti in low-relief, very admired by the Italians who called him "il fattore di putti".

Many Parisian buildings facades from the 18th and 19th centuries are decorated with these scenes directly inspired by Du Quesnoy. Putti are usually represented in these moments of joy and effervescence, which slowly get rid the attributes of Bacchus. Thus, the putti of our fireplace, in the middle of the heavy clusters of grapes, are clearly inspired by this iconography. Instead of goats and cups of wine, the children play ancestral games that evoke the golden age of humanity.

The three represented games are indeed reputed to go back to the most remote times. The swing, represented on the right by a simple rope, was already part of the cult of Bacchus’ feasts, the god of drunkenness and mysteries.

On the left, three children play Blind Man’s Bluff, which is also traceable in Antiquity under the name of the "Game of the bronze fly", narrated by Suetonius.

Finally, Hot Cockles is represented on the fireplace’s frieze. Very well known from the 17th to the 19th century, it was also reputed to date back to the oldest times. Jacques Stella, an engraver of the 17th century, illustrates this with naked children in his book Plays and Pleasures of Childhood, 1657. The game consists in striking in turns the hand of a player, who keeps it in his back, and must guess who hit him. A guard is responsible for checking that he does not cheat, holding the player's head between his knees.

This extraordinary fireplace, covered with sculptures which form a real ode to vitality, also has a very singular form. Indeed, before the end of the century, decorators respect the repertoire of past styles which allows to structure a fireplace with jambs in the form of consoles or pilasters, on which one can add sculptures.

Thus, it is very rare to see a form so organic, as modeled, for a work carved in Statuary marble. Here, the opening of the fireplace is delimited by ivy. Two feet of vines rise on each of the jambs, carved with special attention to the bark, the shapes of the leaves and the curls of the vines.

Bunches of grapes sculpted in high relief, the leaves overlapping, give the impression of being tender and supple, thanks to the skill of the sculptor.

The fireplace and its twin as a souvenir of a soon

This fireplace has a twin recently sold during an auction in London at Christie's. This one, which has identical materials and dimensions, recounts the Second Italian War of Independence of 1859 and celebrates the creation of a unified Italy. On the right, one of the putti holds the Imperial Standard of Napoléon III while on the left, another has the standard with the Cross of Savoy. In July 1858, Napoleon III agreed to help the Kingdom of Sardinia to unify Italy on the condition that the County of Nice and the Duchy of Savoy be annexed to France. The Austrian Empire then declared war on the Kingdom of Sardinia, and as a consequence the Second Italian War of Independence. March 24, 1860 will be signed the Treaty of Turin, between France and Sardinia, and later the kings of the House of Savoy will unify the Italian peninsula. These events allow us to date these two fireplaces around 1865.

On the frieze is represented a scene of war and the corpse of a putto. This subject is the opposite of the childish themes carved on our fireplace: while one fireplace represents a cheerful and happy childhood, the other embodies the misery of war. A deduction can be made about the intention of the private sponsor of these two fireplaces who would be the father of a deceased son symbolized by the putto lying on the lintel. The father would like to remember happy moments through these themes while commemorating the moment of his death during the War of Independence.

Moreover, if we ignore the origin of the two fireplaces, an attribution was made, by the experts of Christie's, to the sculptors Romanelli family of Florence who sculpted a chimney-piece with a procession of putti led by a lion drawn chariot amid billowing clouds, at Carbisdale Castle, Scotland.

The noble statuary marble, the technical precision and the iconography used contribute to make this fireplace a unique work. 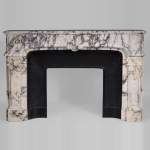 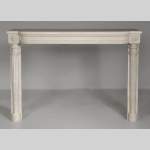 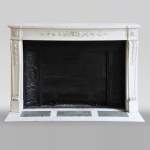 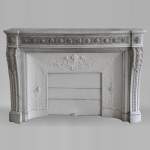 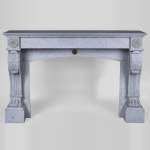 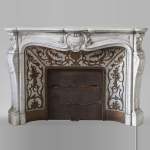 favorite_border New
An antique Louis XV style fireplace made out of Carrara marble with its original enameled insert (ref.3705) 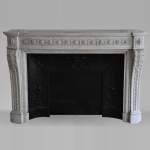 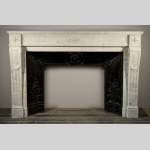 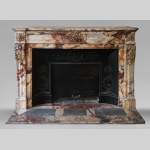 favorite_border New
An antique Louis XVI style fireplace, made out of black marble, decorated with a floral cartouche (ref.3727) 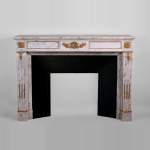 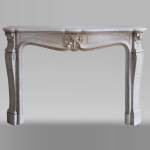 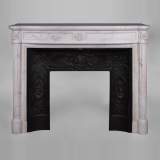