This Louis XV style three pieces clock set in gilt bronze was made around 1900. Identifiable by its rococo-inspired style made of curves and twists, this set is attributed to Léon Messagé who made of this original aesthetic his signature. The mechanism of the clock is modern and the dial is signed ""S. Colin & Cie "" then "" Paris 17, rue des Tournelles "". The set consists of a clock and two candelabra with six lights. The decoration of these elements is very rich and complex and the ornamental repertoire is characteristic of the Rococo style. The dial is adorned with acanthus and laurel leaves curled like a crown. The lower part is devoted to the marine theme with shells, including a large overturned in the center, and two dolphins on each side, a motif often used by Léon Messagé. Remember that the French term ""Rocaille"", from which comes from « rococo », originally refers to ornamentation imitating rocks, natural stones and shells. Typical large curves of this aesthetic, set back on either side of the dial, support the structure of the object that ends with four sinuous feet on a finely decorated tray. A bearded man mask similar to a faun merges in the center into the decor. A certain extravagance emanates from this set with very tormented lines. This impression of movement, already present in the Rococo style, takes a certain scale at the end of the 19th century when Art Nouveau imposes a quasi-organic aesthetic that is not unrelated to the Rococo style. In particular, the candelabra seem to take the form of vegetable: while acanthus leaves are curling on the central part as climbing plants, the arms seem to take the form of branches and foliage. But Léon Messagé remains above all a historicist artist and great interpreter of the Louis XV style as confirm the motifs used: acanthus leaves, laurel branches, curves and a winged putto with bow and quiver enthroned at the top of the clock are the decor of this set.

Messagé is a French sculptor specialized in Regence and Rococo styles, born in 1842 in Sens in the French departement Yonne and died in May 1901. If he started as a ""stone sculptor"", he quickly began a collaboration with the renowned cabinetmaker. François Linke to whom he provided models for furniture and ornamental bronzes. It is thanks to their alliance, among others, that Léon Messagé will be very successful at the end of the 19th century. He will receive a gold medal at the World Fair of 1889 and will be at the origin of the furniture that will expose François Linke during the World Fair of 1900. It seems moreover that our set is the result of their collaboration : on one hand, it was fruitful, and on the other hand, the dial of the clock has the signature of Colin, society with whom Messagé, but also Linke, worked. The Colin society was an art foundry initially located at 29 rue Sévigné in Paris from 1843, before also settling at 17, rue des Tournelles. Renowned for the quality of its productions, it participated in many World Fairs, such as Chicago in 1893 where it exhibited a bronze clock mounted on a white marble column, completed by a woman figure made of bronze after Piat and Steiner. Because what made the reputation of the society, it is also his frequent collaborations with the greatest artists of the time among whom Carrier-Belleuse, Feuchère, Charpentier, Mathurin Moreau and of course, around 1900, Léon Messagé, for whom she made several models. The Colin society is also present at the World Fair of 1900 in Paris. 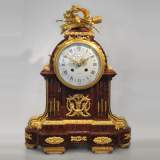 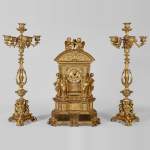 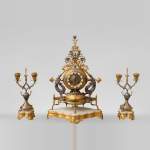 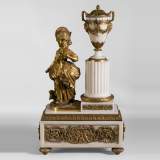 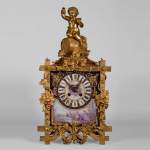 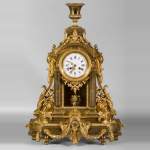 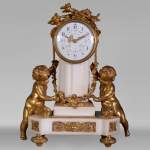 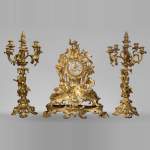 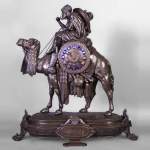 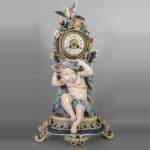 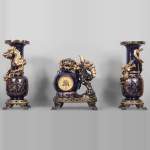 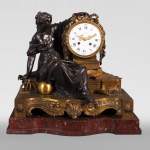