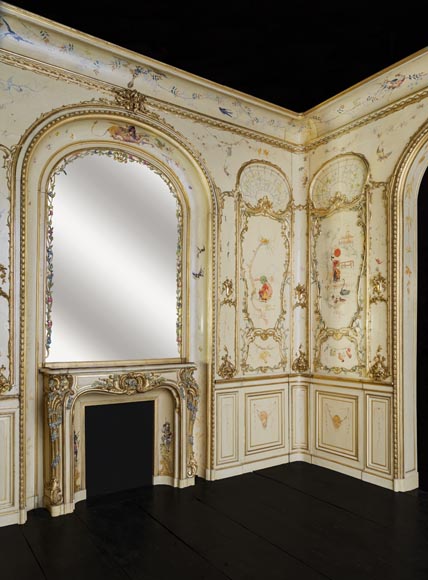 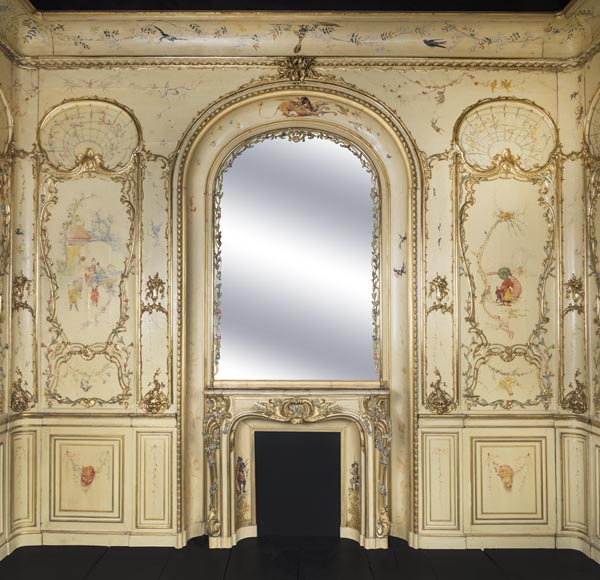 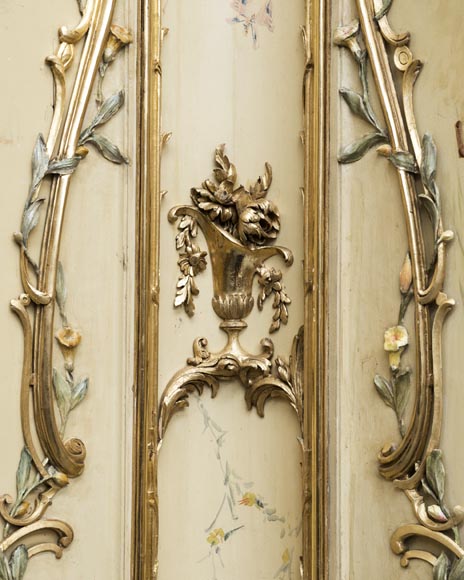 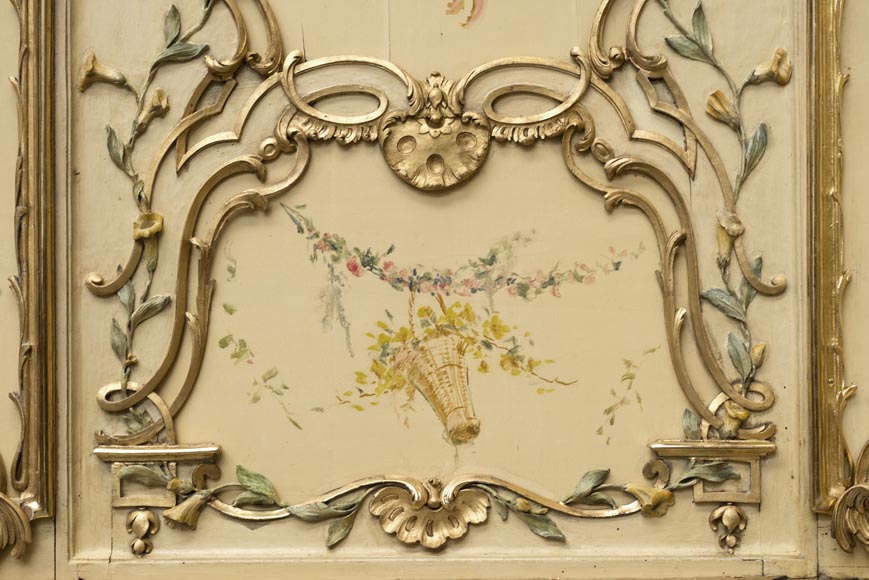 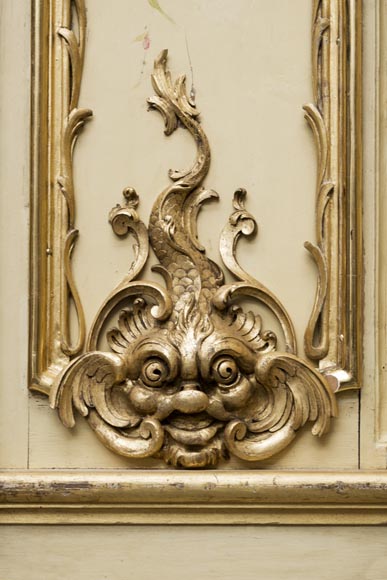 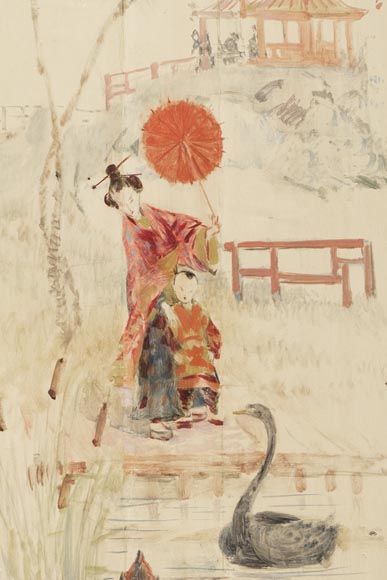 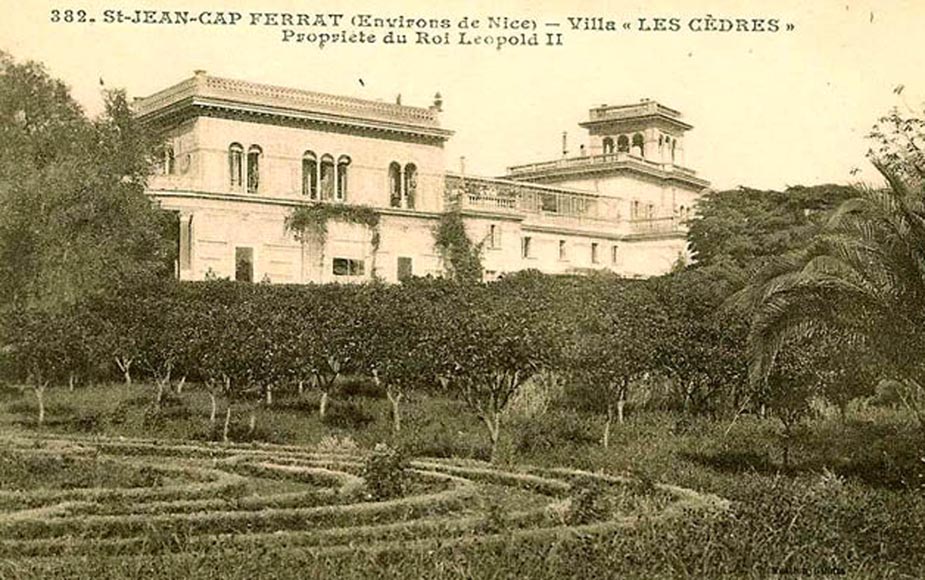 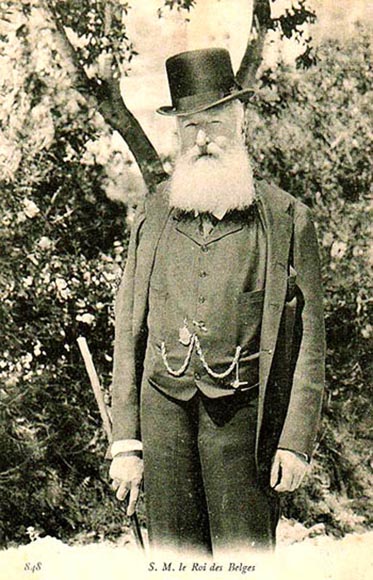 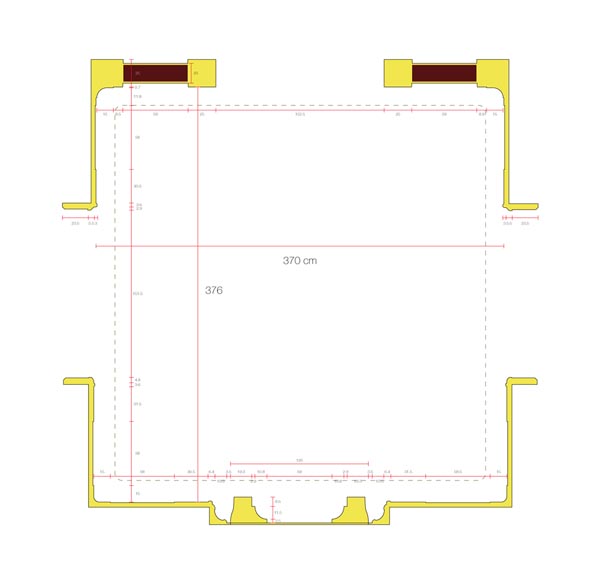 Provenance : Villa Les Cèdres, formerly Villa Les Oiseaux, Cap Ferrat.  Former residence of the Mayor of Villefranche-sur-Mer, acquired by Leopold II, King of the Belgians (1835-1909), then it belonged to Alexandre Marnier-Lapostolle, creator of the French liqueur Grand Marnier and to his descendants ; the property now belongs to the Italian firm Campari.

This refined set of wood panels comes from the Villa Les Cèdres (formerly named Villa Les Oiseaux) in Saint Jean Cap Ferrat. The residence belonged to Leopold II, King of the Belgians (1835 – 1909).
The mayor of Villefranche-sur-mer, David-Désiré Pollonais (1823-1902), first acquired a fourteen-hectare property on the idyllic peninsula of the Alpes-Maritimes. Mr Pollonais wanted to modify the villa which had already been there since 1830 so he entrusted the architect Sébastien-Marcel Biasini (1841-1913) with the makeover. Leopold II bought the estate in 1904. The next year, he assigned Aaron Messiah (1858-1940) to redesign the villa.

The Villa Les Cèdres was acquired by the king in order to settle Blanche Delacroix, his twenty-free-year-old lover whose real name was Blanche Zélie Joséphine Delacroix. The young lady came from a very modest background and was only sixteen-year-old when Leopold II fell madly in love with her. The king showered her with very expensive gifts such as the Château de Balincourt in Arronville (Val d’Oise). In Villefranche-sur-mer, a city next to Saint-Jean-Cap-Ferrat, the king built a sumptuous residence called the Villa Leopolda on a ground acquired in 1900 in order to host his lover. In 1906 and 1907, Blanche Delacroix gave birth to two sons, Lucien and Philippe, who were recognised by the king as his children even if the paternity remained uncertain. Blanche Delacroix frequented Antoine Emmanuel Durieux, an army captain. She had met him long before, she hesitated to marry him at some point but she finally chose to pursue her relationship with the king. The latter gave the two children the titles of Comte de Ravenstein (but this one was born disabled and died at seven years old) and Duc de Tervueren. After he became a widower, the king who nicknamed Blanche Delacroix « Très-Belle » (« Very Beautiful ») also made her Baronne de Vaughan which caused a scandal. He married her on his death bed but she finally married Antoine Emmanuel Durrieux who adopted her two children in 1910. They divorced in 1913.

Aaron Messiah (1858-1940) was the architect of the Villa Masséna which is today a great museum in Nice. He was very active in this town and built several villas for Leopold II : the Léopolda, the Villa Saint-Segond, and the Villa Les Cèdres where he chose a historicist style inspired by the sophistication of styles of the past. He also constructed the Villa Ephrussi de Rothschild in 1907 where he used semicircular arches, columns and panelings inspired by the Great Century. He redesigned the wings of the villa, replacing among other things the squared openings by several big bays.

At the beginning of the 1920’s, the villa was bought by the business man Alexandre Marnier-Lapostolle who created the « Grand Marnier » liquor. He redesigned the East facade of the building and his son Julien, who was a member of the Natural History Museum, created the botanic garden and added some greenhouses. Thus he made the garden one of the most major exotic private gardens in the world. In 1976, the villa became a possession of the Marnier-Lapostolle Company then it was acquired by Campari-Cinzano in June 2016. Since November 2008, the estate is consigned in the French Inventaire général du patrimoine culturel (the French General Inventory of Cultural Heritage). It was put on sale in October 2017 and quite a few press articles mention a 350 billion euro estimation. Crated at the turn of the century, this paneling is faithful to the Louis XV style with its rinceaux, counter-curves and shells. The painted panels are surrounded by frames with foliated rims. They represent some characters escaped from a fantasised Far East. They are also decorated with some chimeric fishes as an evocation of the baroque fountains.
The ornemental theme ensuring the set’s harmony consists of a panel model composed by a sober lower part and a more animated upper part. The lower part is decorated with simple moulded squared parts at the center of which different masks are painted. The upper parts are adorned by two superimposed medallions with baroque forms which are topped by a flowery marquise’s motif in the form of a Chinese fan. On each medallion, little colourful scenarii on the theme of childhood are painted in a very light and sketchy manner. The panels are also decorated with exotic birds which bring dynamism to the composition. They are painted with beautiful colors and a lot of gracefulness.
The artist’s work reveals his skills regarding his gesture which is inspired by Asian art shown during the World Fairs of the second half of the 19th century. This sketchy manner existed already during the 18th century as proved by the chinoiseries of the period. However, it is here developed thanks to the lessons learned from Oriental art.
The first wall includes a fireplace which is characteristic of the second half of the century because of its richly sculpted frieze and jambs, its shells and rosettes. This sophisticated fireplace has a painted interior. On both sides, an archer and a samurai wearing an armor are represented. The fireplace is crowned by a big trumeau forming a semi-circle.  The glass is installed at the bottom of a recess. On the right side of this set, the panel represents a mother holding a green sunshade and a child nearby a stairway. On the left side, there is a children game’s scene with their mother sat on a bench. On the right wall, nearby a picturesque house with a pagoda roof, an elegant woman wearing a pink silk fabric and a Japanese bun with long hairpins holds his son in a maternal gesture to prevent him from falling into the water. Just behind them, there is an imagined barrier in a purified design which reveals the context which is suffused with Japonism. The second panel depicts children playing nearby a pond with a swan. These little Japanese kids wear a braid on the top of their heads and kimonos. They are squabbling as any child in the world would do, thus the painter insists on universality beyond the picturesque differences. On the facing wall, the left panel represents children holding coloured lanterns characteristic of Japan and the right one a young woman swinging. These two lateral walls have arches and the fourth wall is shaped by three arcades separated from each other with tapered columns forming a big door and two lateral windows. 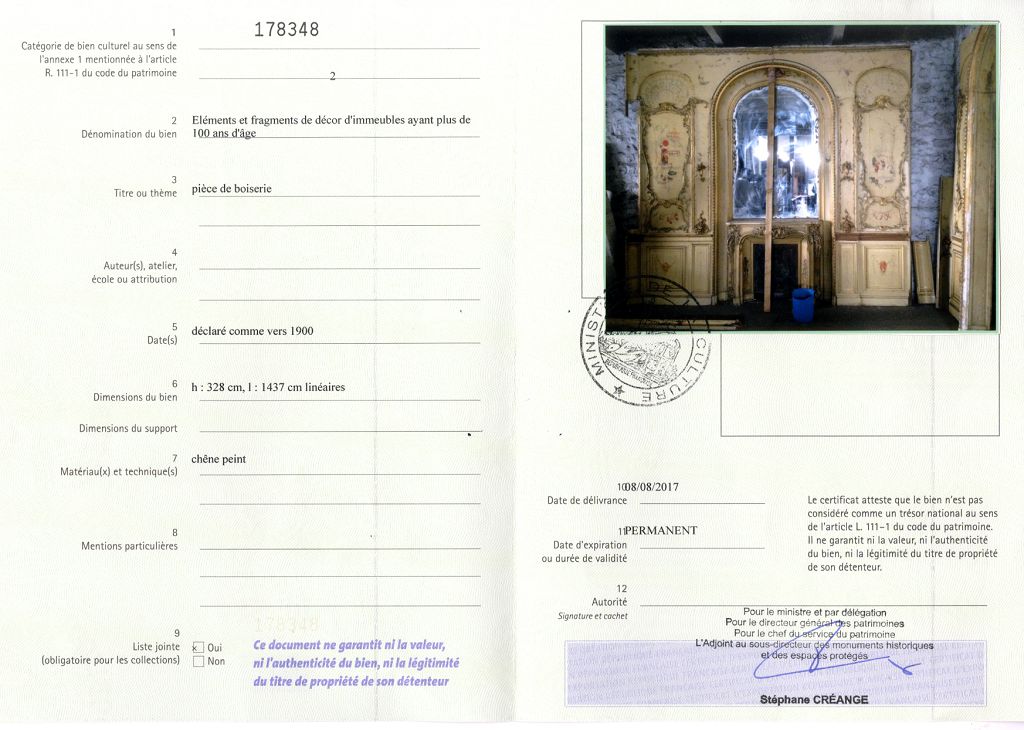 What is the export certificate for? 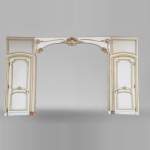 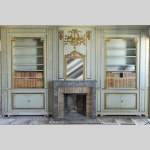 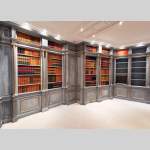 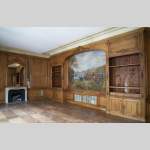 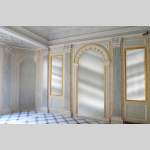 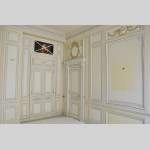 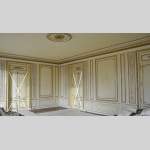 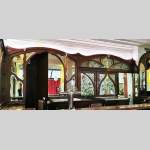 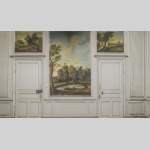 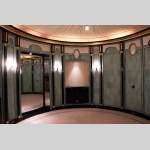 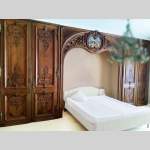 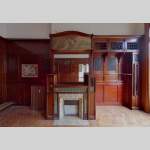