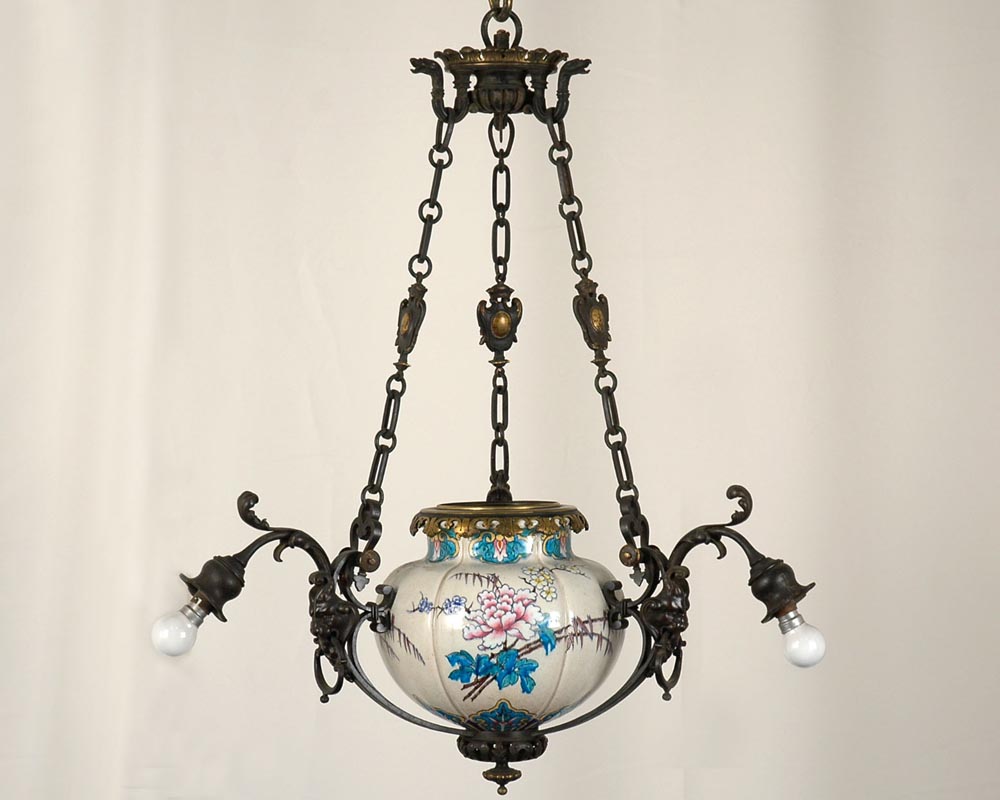 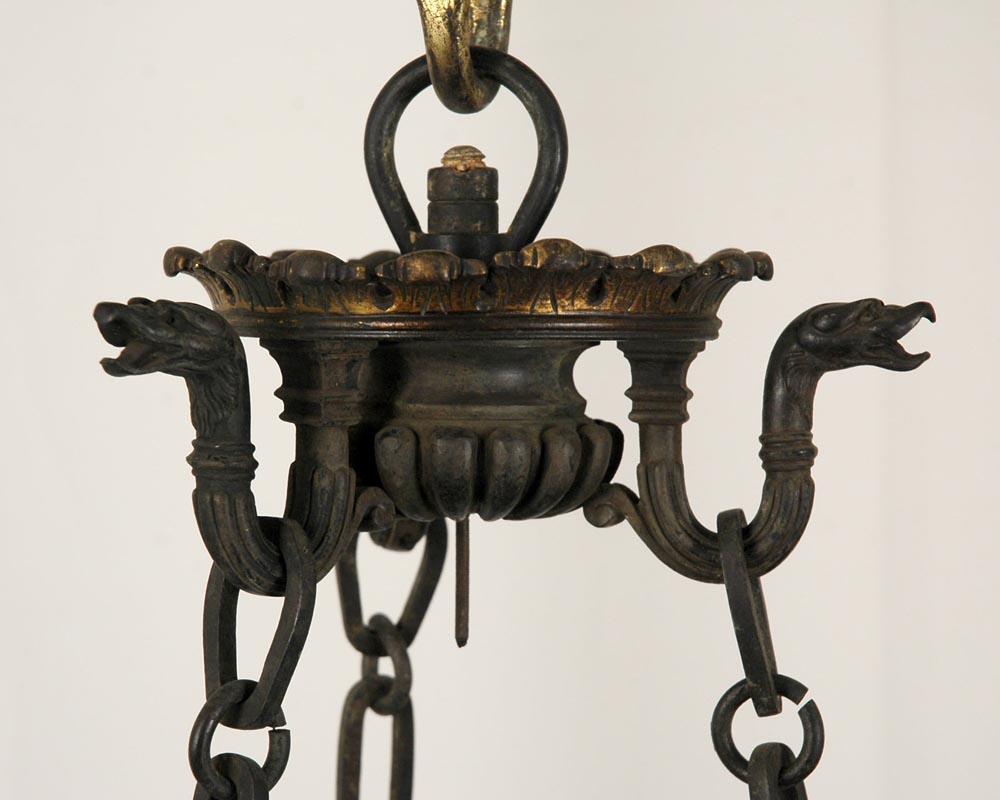 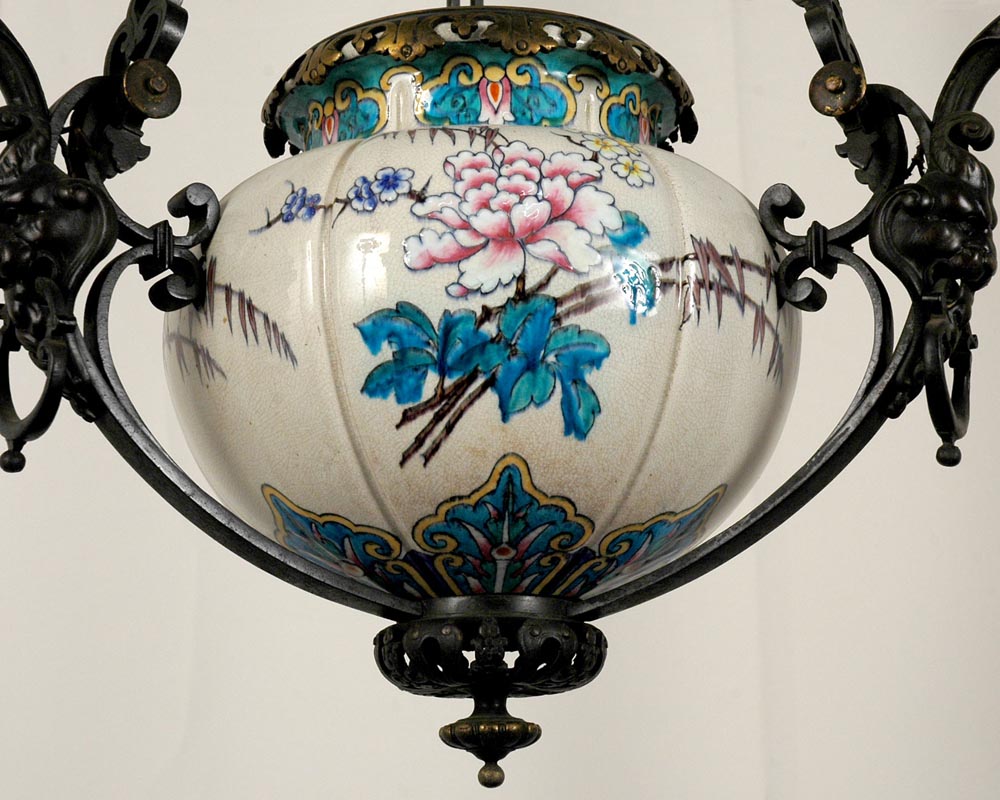 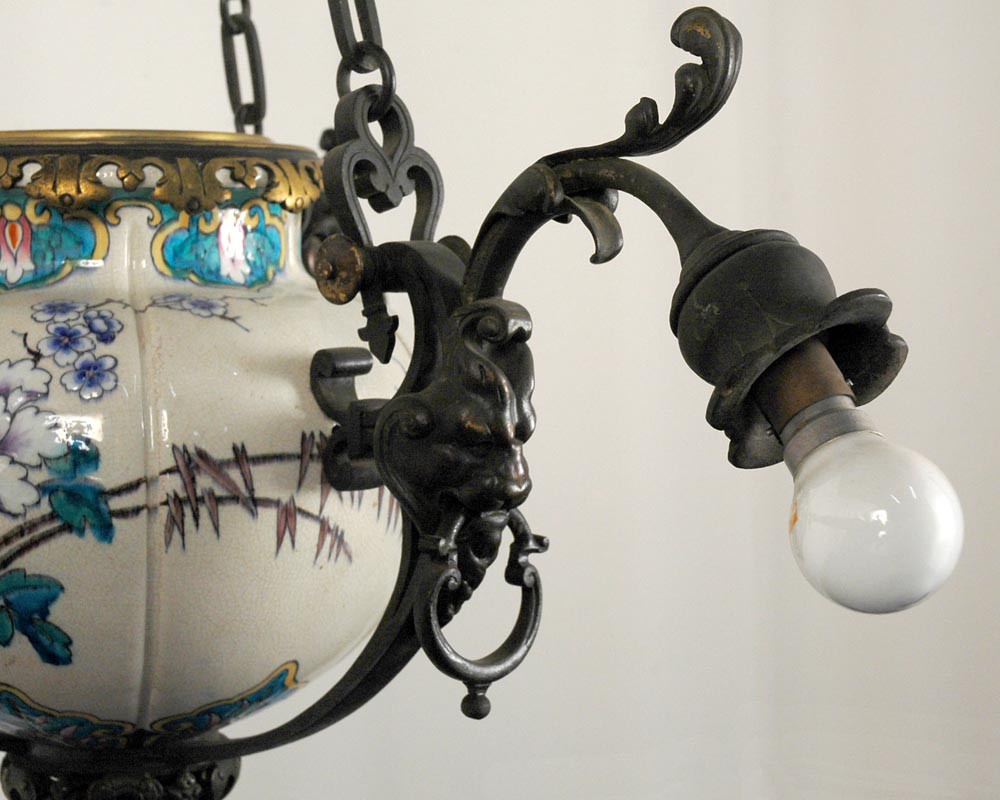 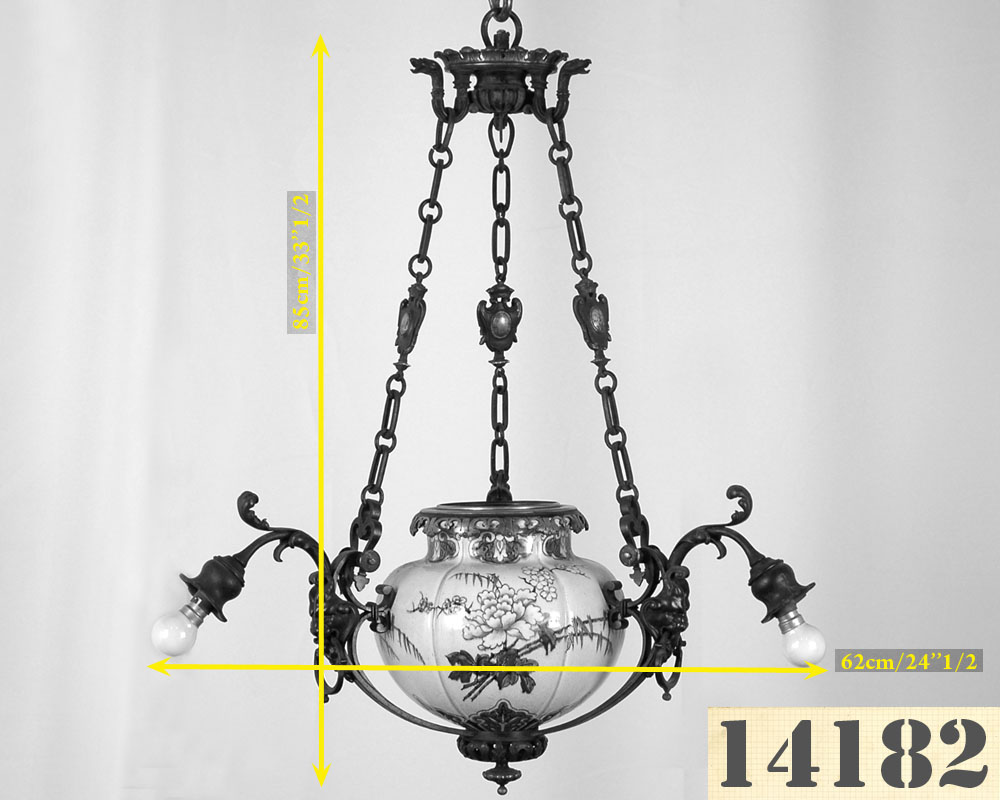 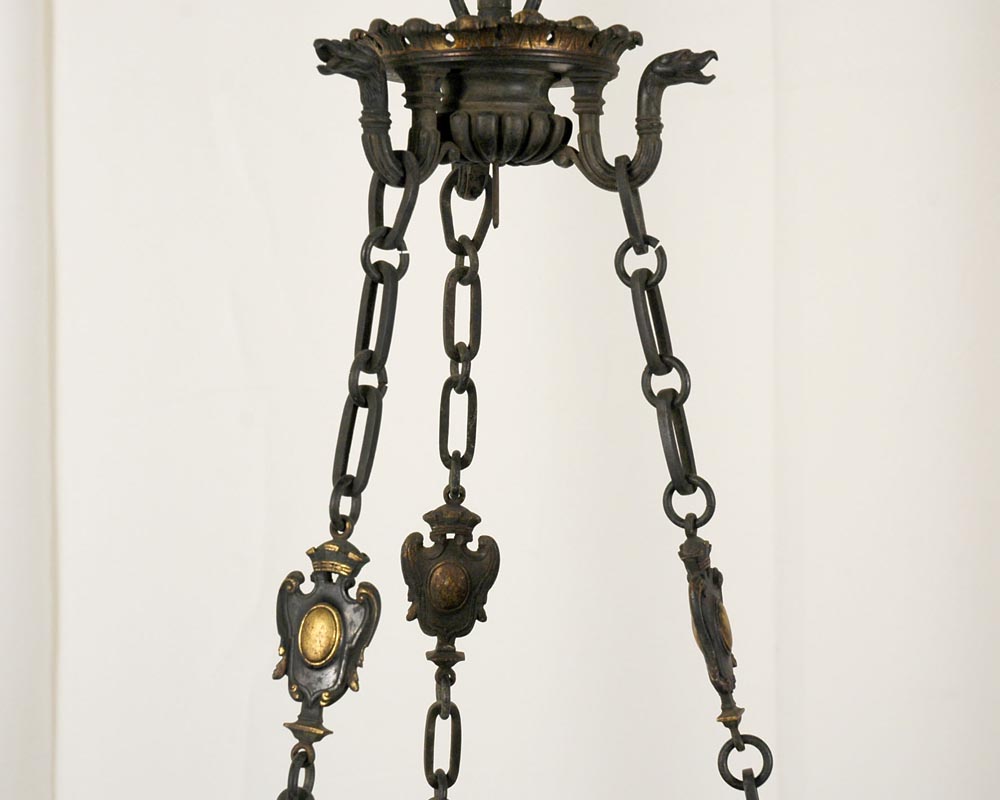 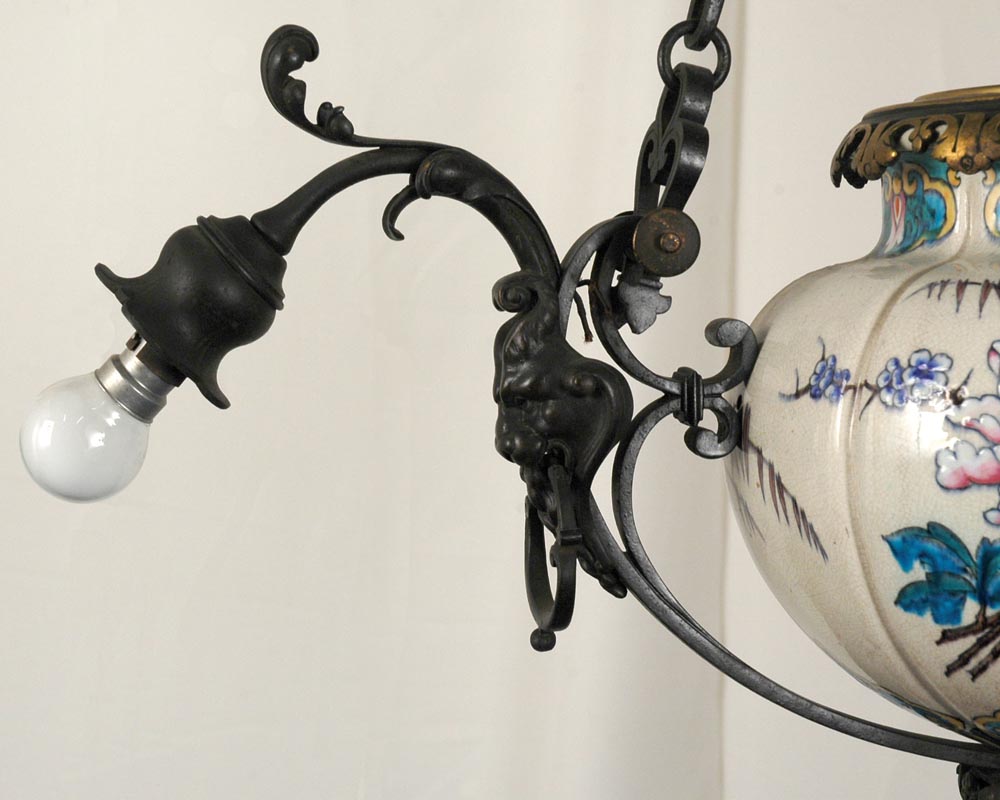 The frame of this celing light was made of wrought iron and has an earthenware suspended center. The mount has an original and stylish design. The top is a spherical element topped with flowers and gadrooned from which spring three heads of fantastic animals. Chains are suspended from these heads. In the middle of the chains, cartridge-shaped ornaments exist. The frame develops around the earthenware center with three candle holders with dramatic shapes. They are decorated with vegetable elements and masks of men. The frame continues into the bottom of the chandelier to support the earthenware center. The egg-shaped and fluted body is decorated with enamel painting in relief. This Far-Eastern inspired decor shows a branch of cherry blossom, bamboo and other foliage plants. In the upper and lower parts of this element unfolds a frieze of lance-shaped palmettes that are Persian or Turkish inspired. The earthenware center is surmounted by a gilded bronze frame decorated with jewels. ?

Because of the characteristic scenery of the earthenware center, the production of this chandelier is attributed to the Jules Vieillard & Co of Bordeaux, active from 1845 to 1895. On February 6, 1845, Jules Vieillard (June 8, 1813 - September 17, 1868) took over the factory of David Johnston, located in the former mills of Chartrons, the Bacalan dock in Bordeaux, which went bankrupt the prior year. Then it became a joint-stock company under the name Jules Vieillard & Co. Jules Vieillard significantly turn around the activity of the pottery and in the 1860s, it became the third in France after Creil-Montereau and Sarreguemines. On the death of Jules Vieillard in 1868, it was his two sons, Albert (1841-1895) and Charles (1842-1893) who took the reins of the business and diversified production with major artistic innovations. The emergence of new techniques, such as enamels in relief dedicated to the Universal Exhibition of 1878, were accompanied by the arrival of new sources of inspiration, thanks to the Amédée de Caranza. He joined the pottery in 1875 and introduced an extremely decorative repertoire and the Middle Eastern style. The chandelier that we display here was a part of this revival, its decor is heavily inspired by Japanese productions. The cherry blossom motif became extremely common in the productions of the factory. The earthenware center of this chandelier is decorated according to the technique developed in 1874 by Theodore Deck: enamel with slipware partitions. It was with the arrival of Amadeus de Caranza that this technique was introduced to the Bordeaux factory. Another chandelier suspended with an earthenware center attributed to the factory of the Vieillard brothers is illustrated in the book by Jacqueline du Pasquier, J. Vieillard & Co, History of earthenware in Bordeaux (p. 85 The latter has a brass frame and a center of decorated earthenware with Japanese inspiration made with encircled enamels in relief. The 1878 World Expo in Paris was dedicated to this new production. It was during this exhibition that the factory displayed the unique Ottoman fountain now conserved in the Museum of Decorative Arts in Bordeaux (inv. 73.1.428). In the 1880s the factory slowly declined, especially after the departure of Amadeus of Caranza. The two brothers successively died in 1893 and 1895, which prompted the definitive closure of the factory on August 20, 1895. 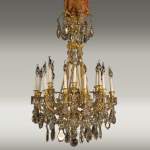 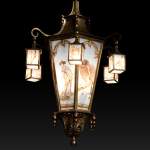 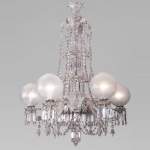 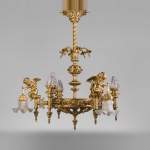 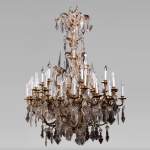 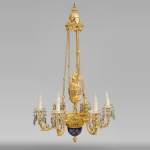 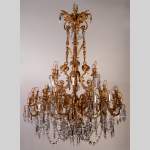 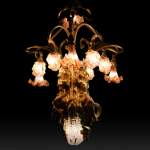 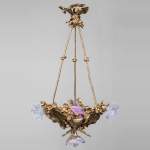 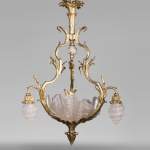 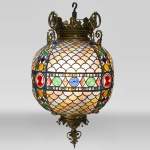 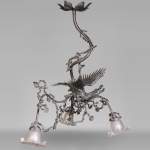