The Pichenot-Loebnitz factory was founded in 1833 by Jules Loebnitz’ forefather M. Pichenot. In 1841, M. Pichenot began making large-sized uncrackable earthenware plates for fireplace mantel inserts and other uses, which he successfully presented at a fair in 1844. To avoid crackling in the enamel, he had invented a process that modified the composition of the raw materials of the body instead of the enamel. Breaking away from the traditional white enameling, the Pichenot-Loebnitz factory was the first to produce decorative architectural tiles in 1849 starting with the earthenware panels painted by Devers for the Saint-Leu-Taverny church.

In 1857, Jules Loebnitz succeeded his forefather, and became the director of the company. His father, born in Îéna and naturalized French in 1824, had married in to the Pichenot family.

An artist as much as a businessman Jules Loebnitz inherited the company and for his first major job passionately collaborated with architect Félix Duban on the restoration of the Blois Castle, recreating the antique tiles of the mantelpieces. He then worked with the most prominent architects of his times, Eugène Viollet-le-Duc, Laval, Charles Garnier, Just Lisch and Paul Sédille. A friendship was born in 1867 between Paul Sédille, the architect of the Printemps department stores and the Basilica of Bois-Chenu in Domrémy-la-Pucelle, and Jules Loebnitz that would lead to a tight long lasting professional, artistic and intellectual collaboration. This was an important meeting between the theorist of polychrome architecture and the man who had pushed French ceramic art considerably forward, allowing for large enameled earthenware plates decorated with very bright and long lasting vitrifiable colors, to quote the Brongniart’s words. Many architectural projects were born from the collaboration of Sédille and Loebnitz: World’s fair pavilions, apartment buildings, villas, hotels and monuments.

A reporter covering the 1878 World’s fair described the monumental door of the Fine Arts Pavilion in the following words: “Nothing is more beautiful than the monumental door to the Fine Arts entrance made by Mr. Loebnitz and designed by Mr. Sédille [ … ] everything about it is grandiose, with an elegant and crafty décor, an enamel that can withstand our cold wet winters [ …]” Indeed the portico of the Fine Arts section designed by Sédille included some earthenware elements that measured as much as 47 inches square, made by Loebnitz. This collaboration was rewarded with a medal.

In 1884 at the Decorative Arts Central Union exhibit, Paul Sédille created the entry door adorned with a shield bearing the emblem of the Central Union and a decor inspired by Luca della Robbia, with two reclining female figures modeled by the sculptor André Allar that symbolize Spring and Fall. As he stood admiring the two panels he had made [and for which he had already received the Medal of Honor in the Amsterdam Fair in 1882]: “on the level of ceramics, I (modestly) believe these are masterpieces. In all the exhibits I have visited, I have never seen anything equivalent” (written in August 25, 1884).

Jules Loebnitz commissioned Sédille to renovate his workshop 4 rue de la Pierre-Levée in Paris between 1880 and 1884. The façade was adorned with large ceramic panels drawn by Lévy, a Prix de Rome recipient. In 1883, Sédille asked his ceramist friend to create the enameled earthenware sign plates for the new Le Printemps department store to go with mosaics he had gotten from a Venetian workshop.

“You will need to carefully marry the ceramics with the other materials and specially associate the powerful colors of your enamels harmoniously with the range of colors.” was the advice Paul Sédille gave to Jules Loebnitz in preparation for the World’s Fair of 1889 in Paris. This is how his letter ended:

« Finally I hope that together we will see the generalization of our common dream, of a decoration that is authentic, colorful and everlasting by the grace of earth and enamels emerging from the fire in an inalterable state.”

During this exhibit, as member of the jury, Loebnitz presented an “exhibit of earthenware applied to architecture”, an “elegant portal adorned with enameled tiles and terra cotta. The center piece was a monumental brick mantel, adorned with enameled ornamentation and under the arch two groups of life size terra cotta natural color figures; architecture by Mr. Paul Sédille, figures by André Allar”. The exhibit of 1889 was the height of the  golden age for iron and ceramics.

The common dream of Sédille and Loebnitz was expressed in the polychrome architecture of the former and made possible by architectural ceramics of the latter. Loebnitz used unbreakable earthenware to create genuine architectural elements, which were inherent parts of the construction, resistant to thermal shock and acting as a perfect foundation for traditional tin-glazed enamels. This gave birth to architectural ceramics.

In London in 1886, Paul Sédille declared before the members of the British Royal Institute of Architects that “architecture is a direct emanation of Nature […] color is the very manifestation of Nature.” He concluded his talk asking if polychrome was not the source of Antique architecture’s perfection. Since 1871, in the line of Hittorff, he constantly championed the principle of color in architecture, repeating over and over that polychrome was a universal principle in architecture, and that its eclipse in France since the 18th century could only be a short term phase. He recalled that Greek and Roman architecture were polychrome; spoke of Viollet-le-Duc’s attempts to restore the inside and outside of Notre-Dame de Paris to its original polychrome state; and declared that Della Robbia’s enamels were his perfect idea of architectural ceramics, although he himself refused to use the human figure in his large scale polychrome pieces.

To defend his thesis, Sédille drew his sources from all countries and civilizations. The progress in History and Archeology (the discovery of Darius’ palace in Susa and the glorious exhibition of the friezes of his palace in the Louvre) was a solid base for his argument, as were his travel journals and sketches, and enabled him to ultimately propose guiding principles for modern polychrome architecture.

Color was an expressive addition to architectural form and in order to demonstrate this in his talks, Sédille invoked Mexico, Peru, the enameled decors of India and more specifically those of the fortress in Gwalior. But it was the Far East that afforded him the essential basis for his demonstration, like many of the artists of the times. The West showed a renewed fascination for the East since the Romantics of the early 19th century. Paul Sédille, also a painter, exhibited his work inspired by the Barbizon school almost every year at the salon. He particularly appreciated the work of Albert Pasini who often represented doors of palaces or mosques with bright colored ceramic tile decorations, inspired by his trips to Turkey and the Middle East. Sédille knew most of the richly illustrated albums coming from the more and more frequent diplomatic or artistic journeys, which were a powerful inspiration.

All his life, Sédille followed closely the archeological research in North Africa and the Middle East, thus nourishing his study and passion for monumental polychrome architecture.

Paul Sédille’s intimate conviction was that the ceramic medium was the king of polychrome architecture materials and Jules Loebnitz’ earthenware satisfied this ideal. To him, modern polychrome needed to last as long as the building, which made his collaboration with Loebnitz so interesting. Indeed, the ceramicist had two large factories in Paris, with 130 square feet of workshops allowing him to create with his secret unbreakable earthenware technique the pieces he and Sédille imagined. Loebnitz also deposited patents for new techniques such as “embossed décor” plates and “terra cotta tiles with recessed enameled ornaments” just like the ones he made in 1863 for the restoration of the chateau in Blois.

The major architectural products manufactured by Loebnitz were, on one hand, incrusted sandstone or Neo-Medieval style enameled terra cotta paving tiles (such as those made for the restoration of the Loire valley chateaux), and on the other, stove tiles and decorative plates with flat, incised or relief enameled polychrome decors for use on interior or exterior walls, in an eclectic style often of Renaissance inspiration.

A trip to Spain : a revelation

Wanting absolutely to experience Arab art with his own eyes Paul Sédille took a trip to Spain to admire Grenada, Seville and Córdoba. Sédille was rendered breathless by the Alhambra in Grenada, the Alcázar and the Casa de Pilatos in Seville, and most of all by the mosque in Córdoba.

Inside the Mezquita (mosque), both the Mihrab and the Maqsura – the most holy place – entranced the architect. This is what he wrote about the mosaic of the Maqsura: “This mosaic, made of very small cubes of glass adorned with beautiful Kufic writing and arabesques of the most noble and elegant design, set against a gold and blue background, far surpasses in beauty, harmony and richness of hues anything Venice, Rome of Ravenna has to offer of the kind. This mosaic is sister to the weaved and embroidered marvels created by the Genius of the Orient.” He spent hour sketching and filling his note books.

The influence of this trip on Sédille was instantaneous. Upon his return, his collaboration with his friend Jules Loebnitz began by the villa Dietz-Monnin, rue la Fontaine in Paris, which is unfortunately gone.

Based on what he had seen in Seville in the patio of Las Doncellas in the Alcázar and the courtyard and stairway in the Casa de Pilatos, in the factories of Triana in the outskirts of the town, he gave Jules Loebnitz Arabic style models that were used in several of his projects, on the main façade of the Boisrond villa (1879), the backyard façade of the Weber villa (1885) or the guesthouses of a private mansion 11 rue Vernet in Paris (1885,unfortunately destroyed).

In Arabic art, Paul Sédille had found the abstract floral ornamentation and the simplified range of shades of color that he considered fit for monumental decoration.

Jules Loebnitz focused his production on Architectural elements, under the influence of Paul Sédille after this trip to Spain.

With more and more commissions, Loebnitz assisted by his son Jules-Alphonse since 1880, produced among other projects the decors of the Champs de Mars and Le Havre train stations, the theater in Monte-Carlo, the tiles of the cupola of the Joan of Arc monument in Rouen and Jules Loebnitz triumphed again in many industrial and decorative exhibitions. When he died in 1895, Sédille built a tomb in the Père Lachaise cemetery in Paris for his friend.

The company continued excelling with Jules-Alphonse, Jules’s successor. For example in the 1900 Fair, he presented a fountain surrounded by a kiosk - the fruits of his own collaboration with Paul Sédille.

The depression of 1929 and the intense competition of industrial ceramics forced the company to close its doors in 1935. 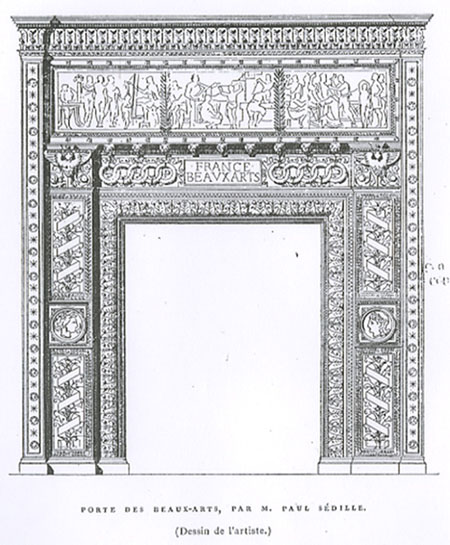 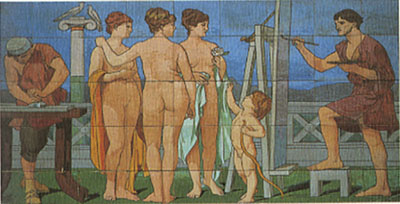 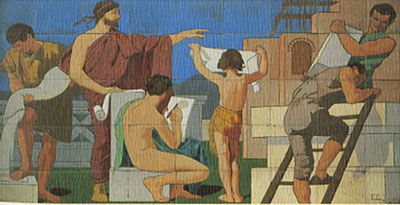 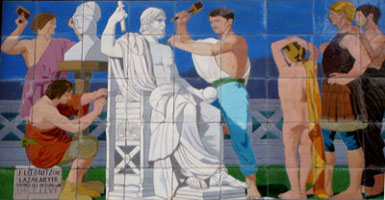 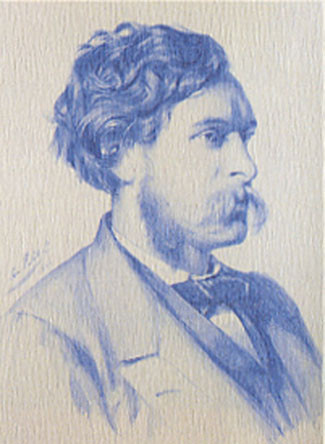 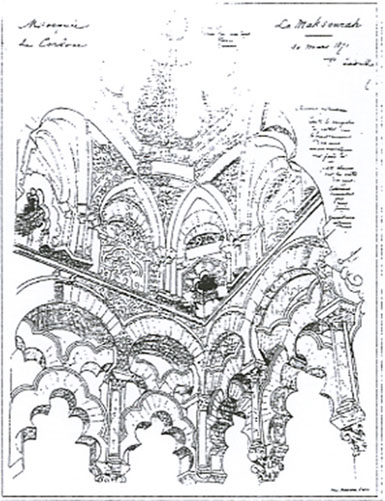 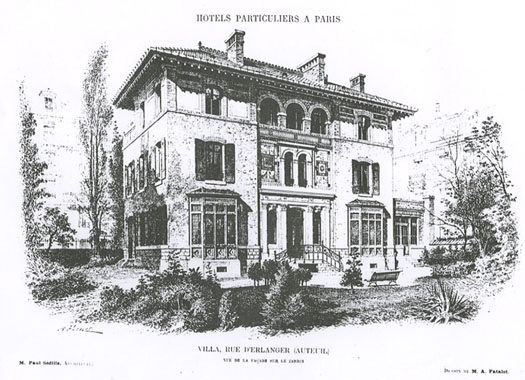 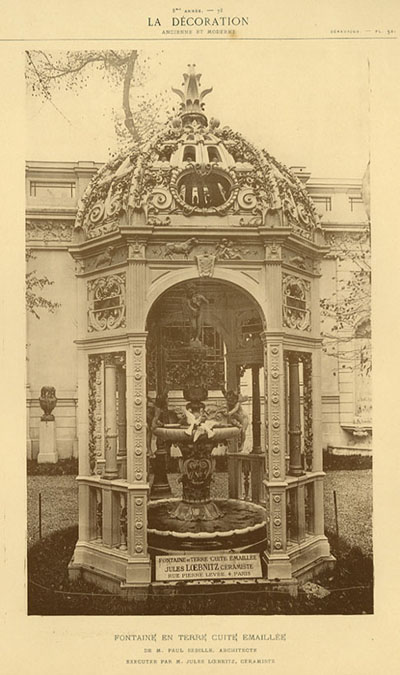 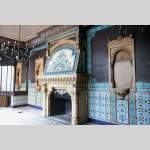