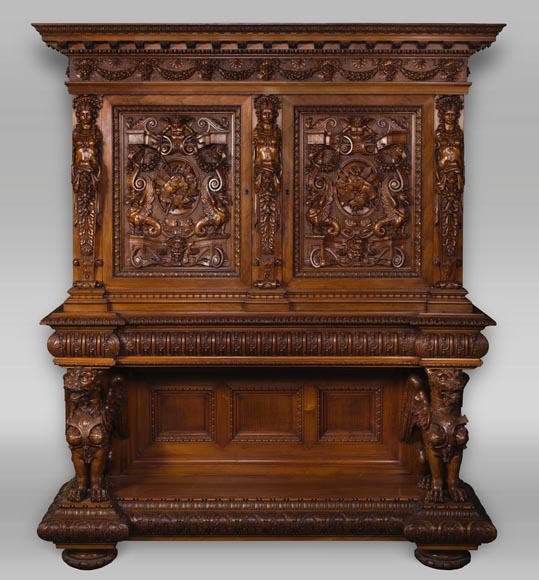 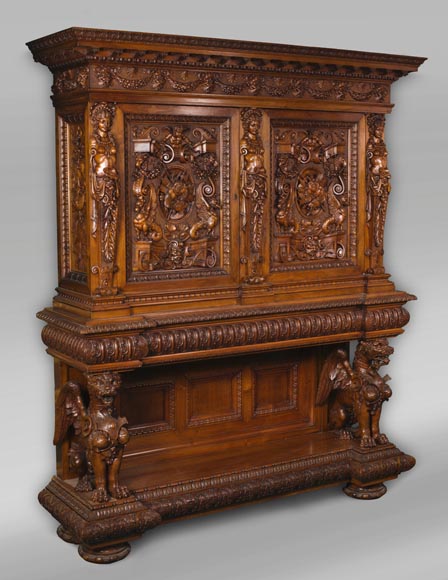 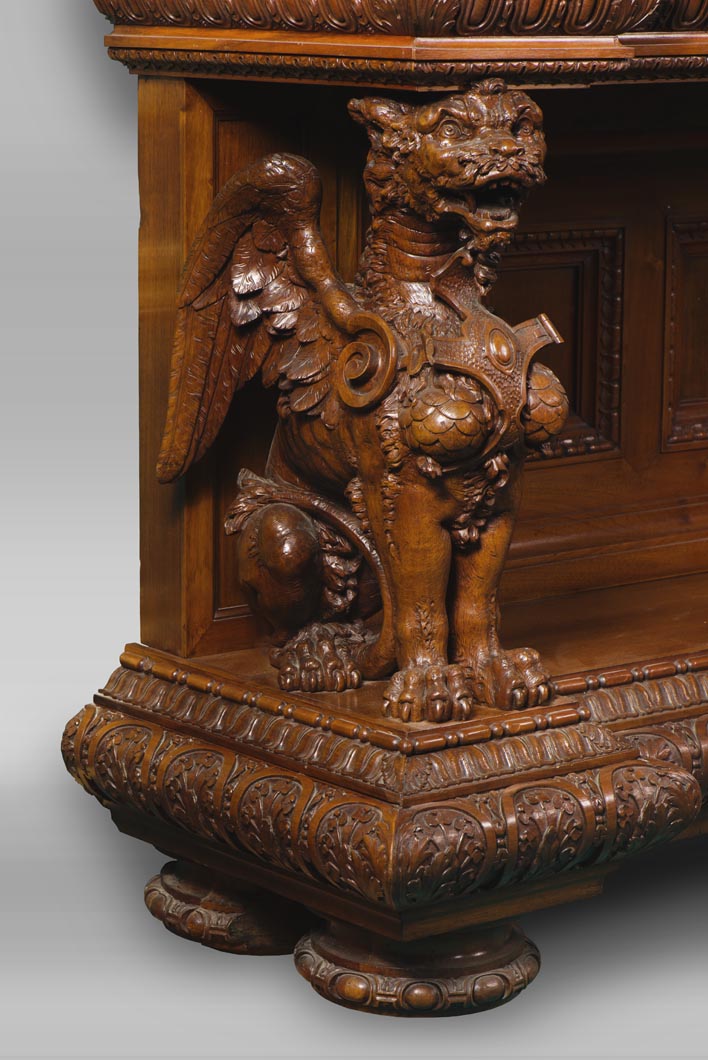 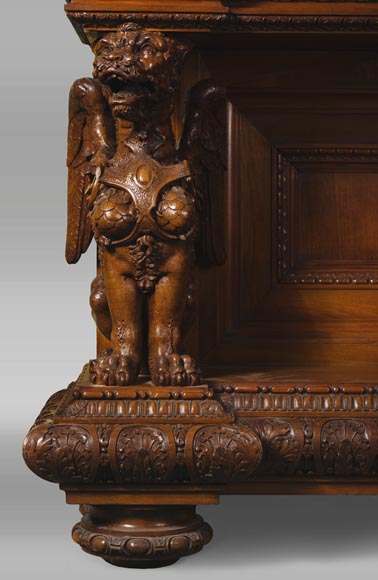 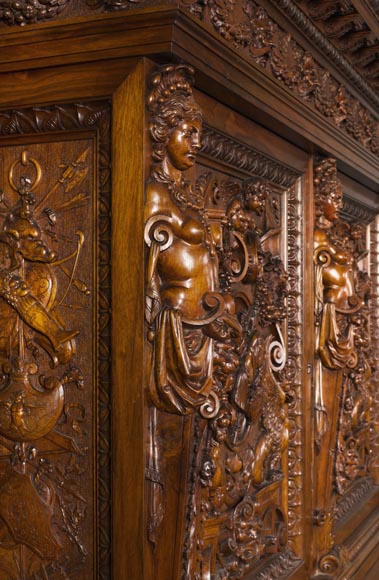 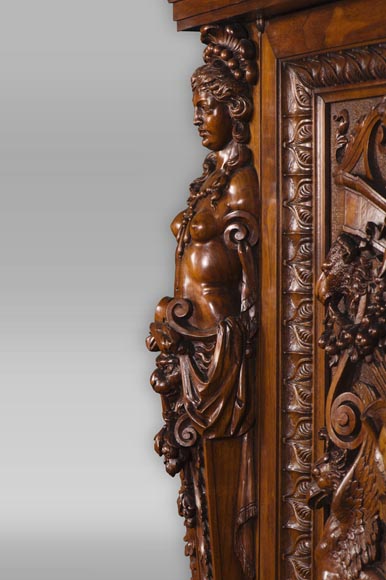 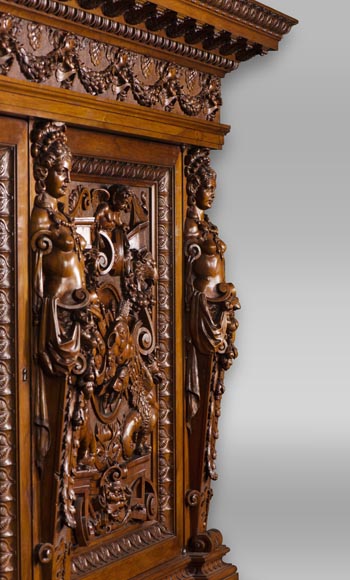 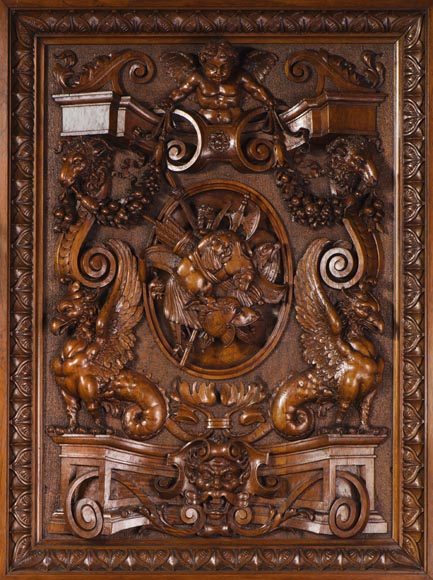 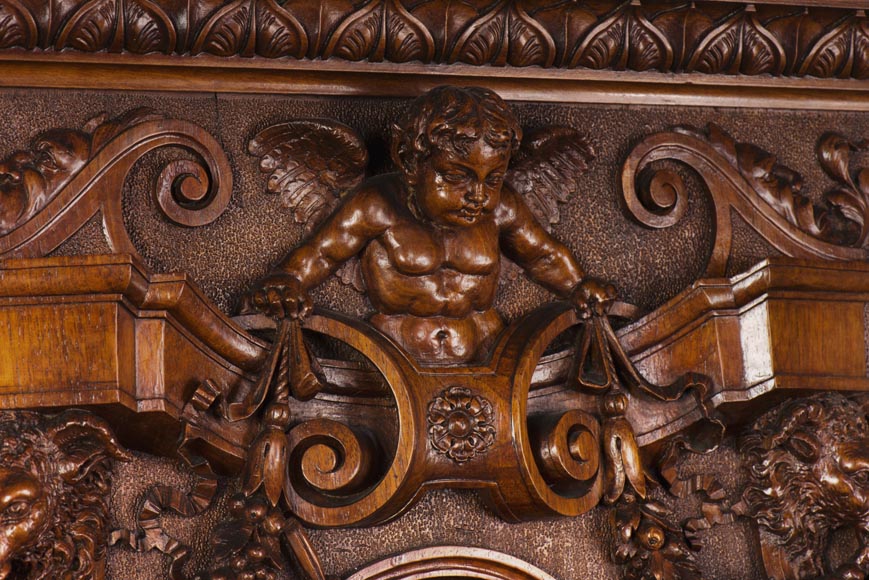 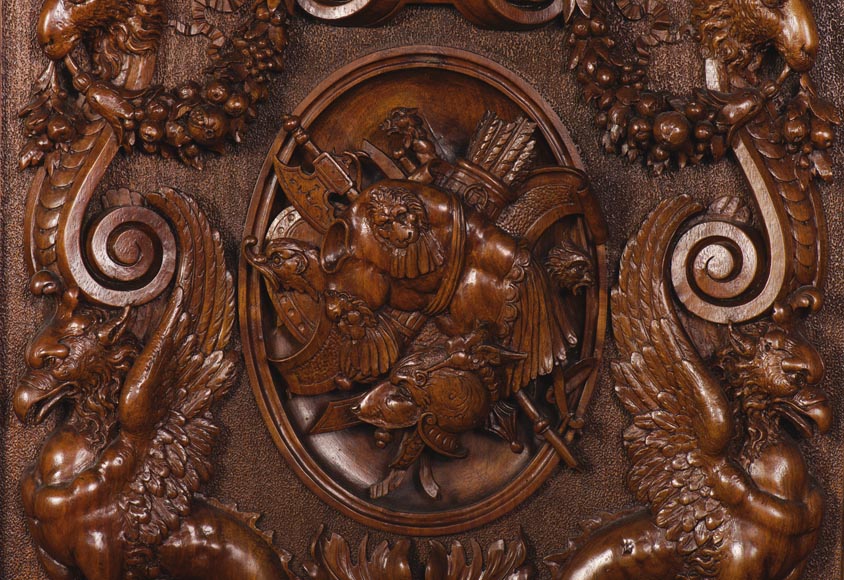 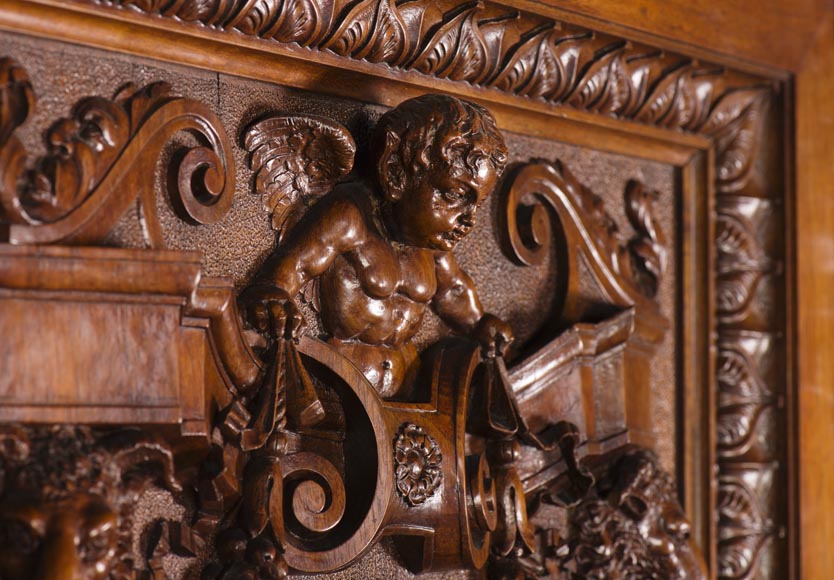 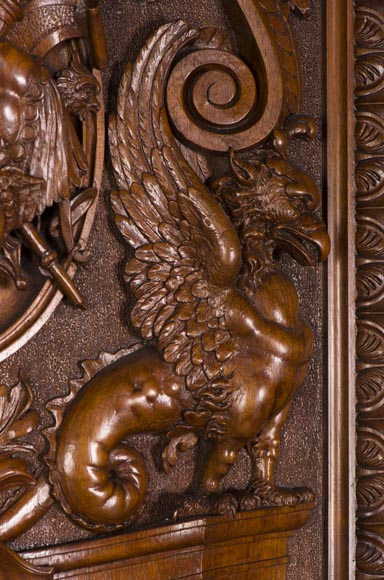 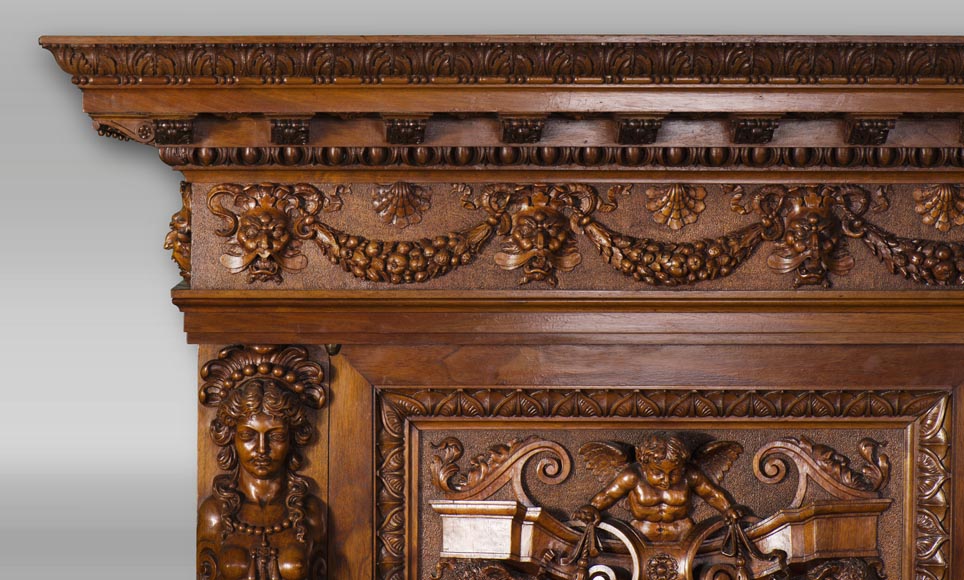 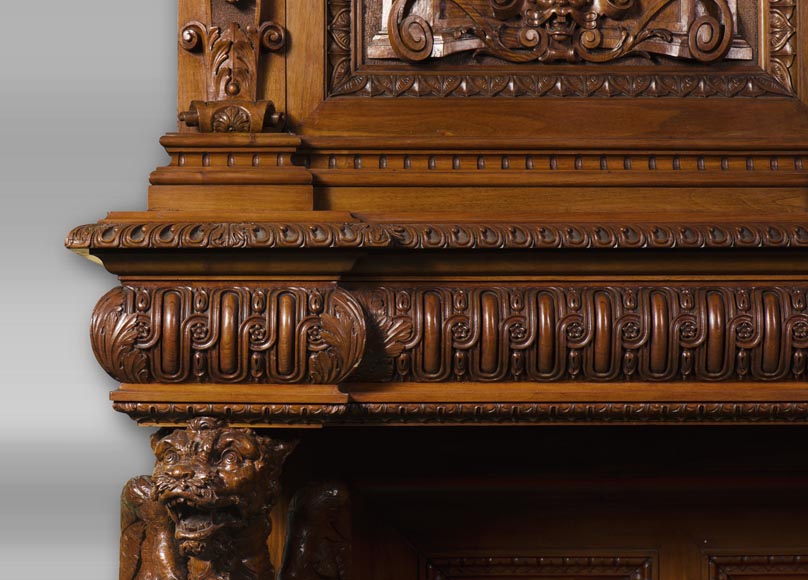 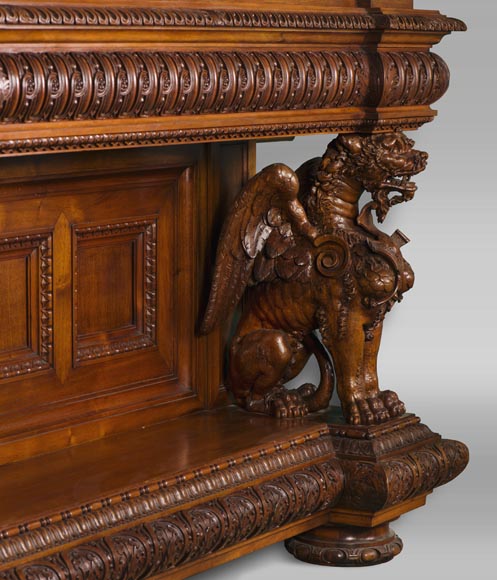 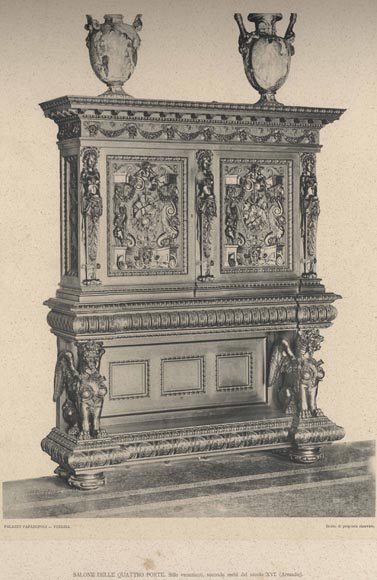 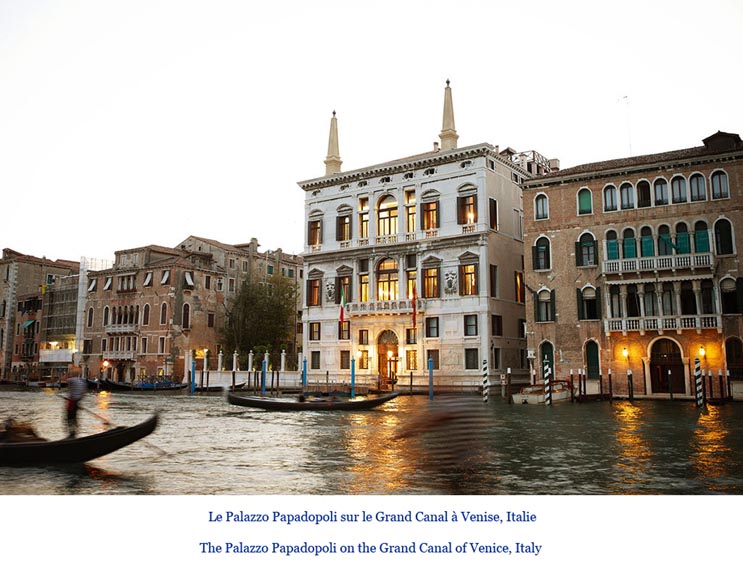 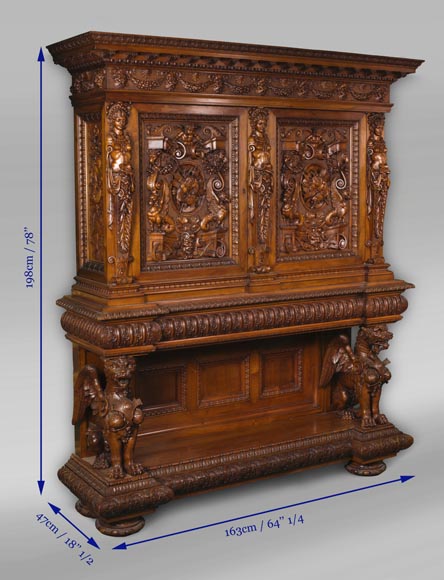 A sumptuous sculpted credenza coming from an exceptional furniture set realized by Moses Michelangelo Guggenheim for the Palazzo Papadopoli in Venice, Italy

This unique cabinet in two parts forms a credenza in its lower part. The base consists of a background decorated with three rectangular molded panels. The shelf rests on two armored and winged lions sculpted in the round. Their massive limbs are as impressive as their mouths, which seem to be more like dragons than those of lions. The quality of the sculpture is evident in the representation of hairs, scales that cover their chests and the extremely muscular necklines. The upper part of the credenza consists of two panels alternating with three women depicted in the bust and ending with a sheath and a sculpted wreath of acanthus leaves. Both panels are entirely sculpted: a fantasy architecture, inhabited by a bulging muscled putti supported by two griffins, shelters a medallion sculpted with a trophy of arms. The two panels meet symmetrically while the backings of the piece are also decorated with sculpted panels with motifs of arms trophies. The entablature has a frieze of festoons alternating with masks and encircled by shell motifs. Each sculpted panel has a texturized bottom, which increases the relief of the sculpted motifs and plays with the light on the prominent parts. Each surface of this cabinet is covered with carvings, in a kind of horror of emptiness that is typical of the 19th century interiors. The shape, inspired by the two-pieced cabinets of the Renaissance, has an affirmed architectural structure associated with an abundance of sculptures of dazzling skill. There is a real attention to woodworking, which offers stunning carved designs through their quantity and quality of execution.

In the nineteenth century in Europe, production of manufactured goods underwent an unprecedented growth: the decorative arts become the "arts applied to industry." Production of decorative arts in the second half of the nineteenth century faced dilemma: how to reconcile art with the appearance, around 1850, of mechanization and industrialization? How to reconcile traditional craftsmanship and mass production? Some, like the Guggenheim in Venice, were convinced that an alliance was possible, even necessary, between art and industry. It was necessary to reflect on the ways to produce artworks of extraordinary quality and that would still be able to profit from the possibilities offered by the evermore efficient technical means. In many factories, this was demonstrated by the collaboration between artists and manufacturers. In Stabilimento d'Arti Decorative e Industriali, Guggenheim himself occupied all these positions: antiques buff, he had built a personal culture second to none and used his library and his personal collection of artwork as a repertoire of designs that needed to by studied and understood. This was characteristic of the time, which held the conviction that the renewal of decorative arts was inseparable from the study of historical styles. The direct inspiration of these past decors shows a great passion for history, quite representative of Guggenheim .

The Palazzo Papadopoli is a Venetian palace built by Giovanni Giacomo de 'Grigi (active from 1540 to 1575), around 1560.
The palace passed from hand to hand before being purchased on January 25, 1864 by two brothers, Nicolo and Angelo- Papadopoli Aldobrandini. Thus began the last phase of splendor of the palace which was considerably enlarged and whose surroundings were redecorated entirely from 1874-1875. This undertaking was led by the architect Girolamo Levi and by the decorator and antique dealer Michelangelo Guggenheim. This exceptional sculpted credenza is part of a somptuous furniture set realized for the Salone delle Quattro Porte of this Venetian palace. 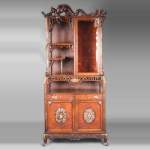 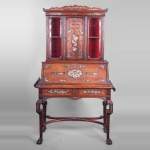 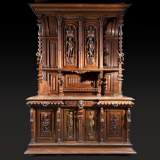 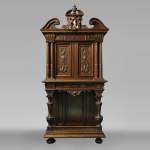 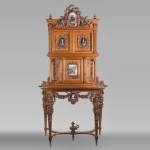 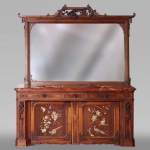 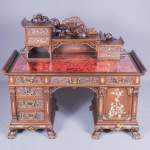 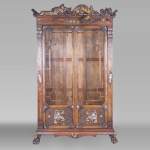 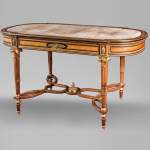 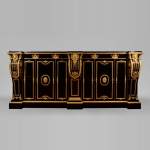 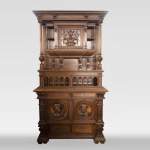