(0 Objects)
chevron_left Back
< BACK Home Objets d'art Objects Maison GIROUX and Ferdinand DUVINAGE - Exceptional and rare cup with waders with iridescent glass and electroplated decor, circa 1870-1880 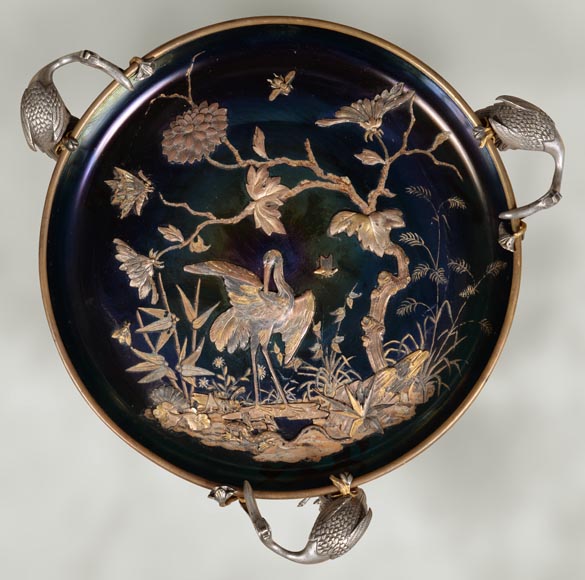 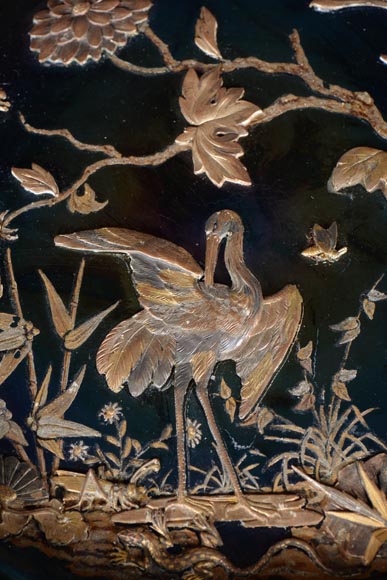 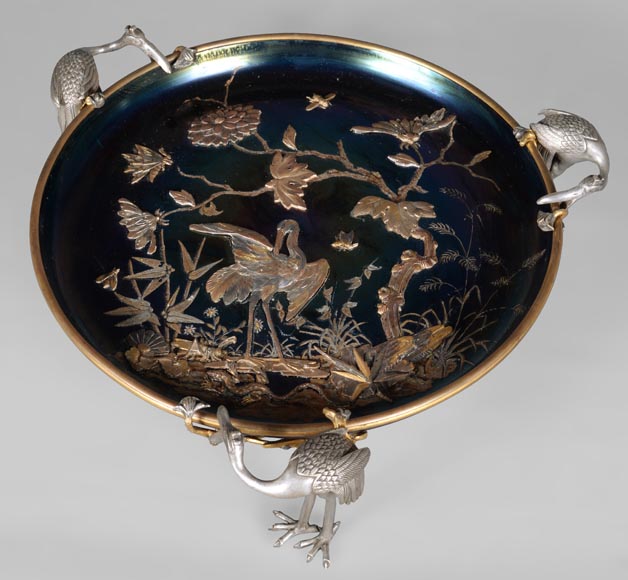 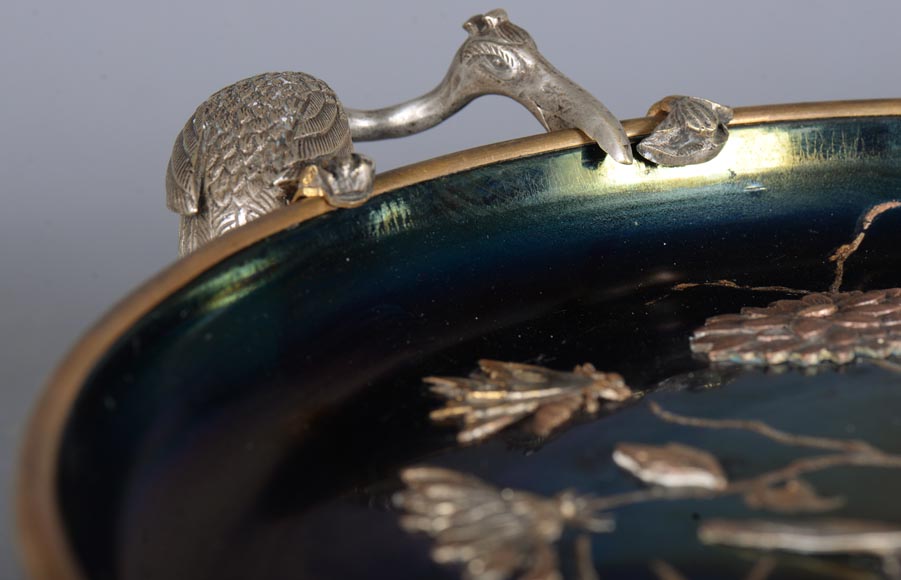 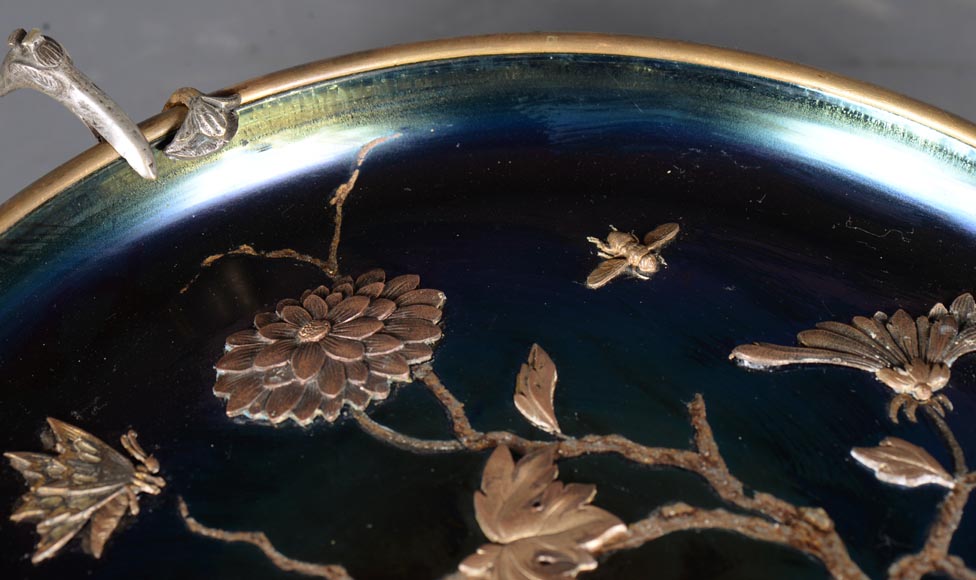 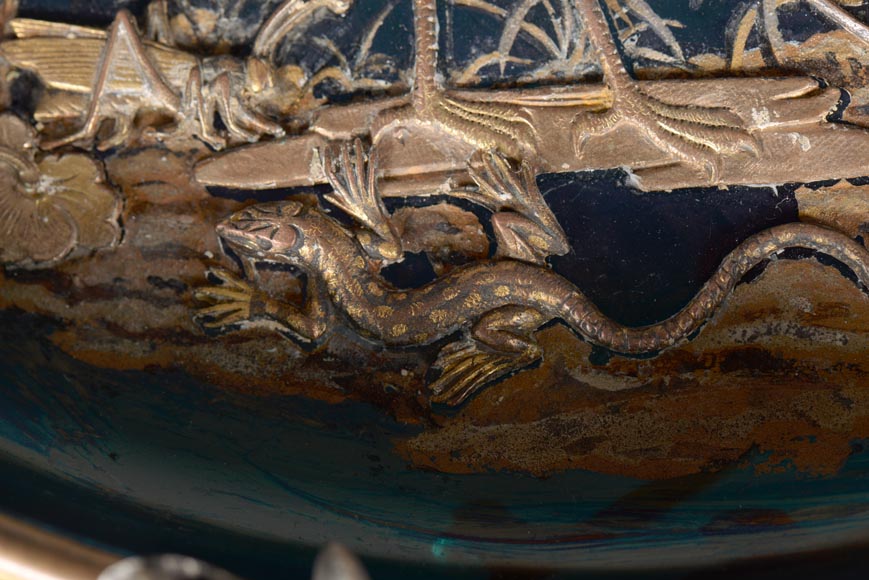 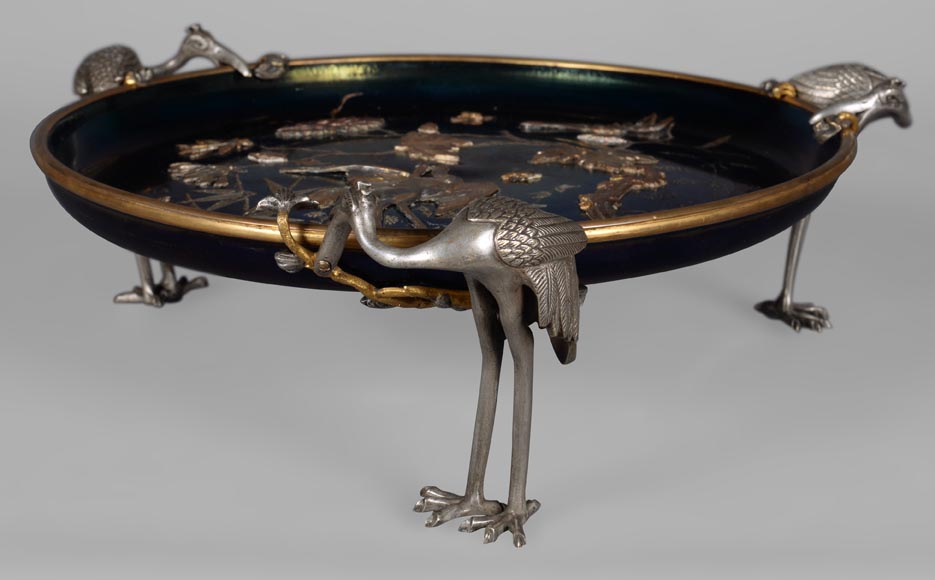 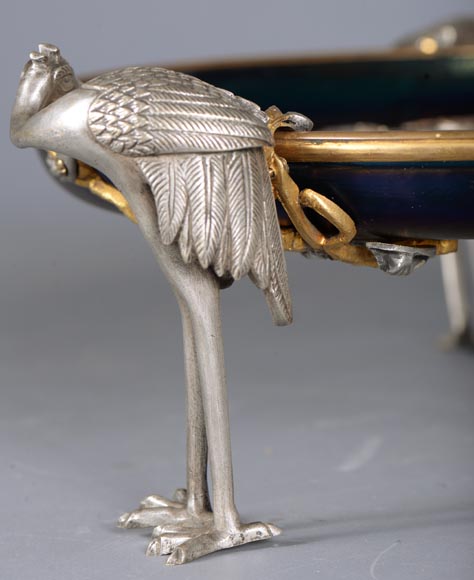 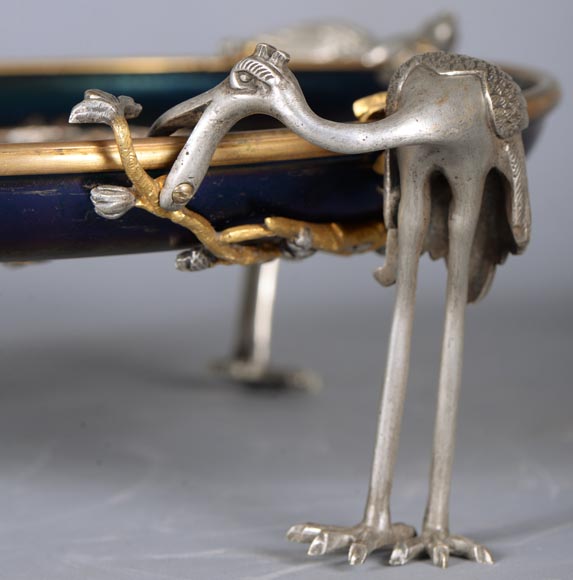 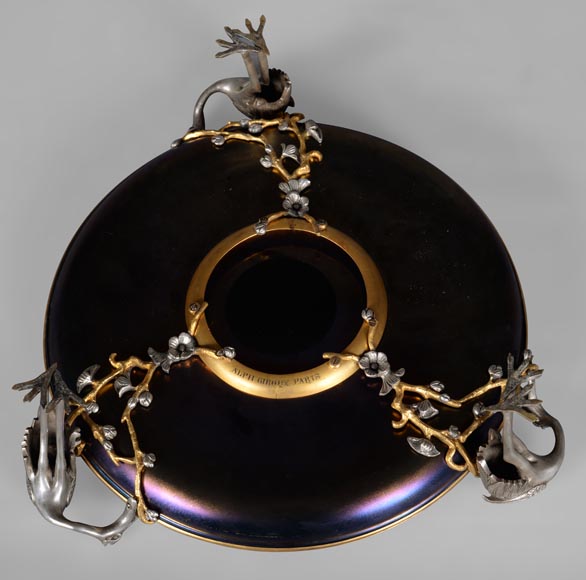 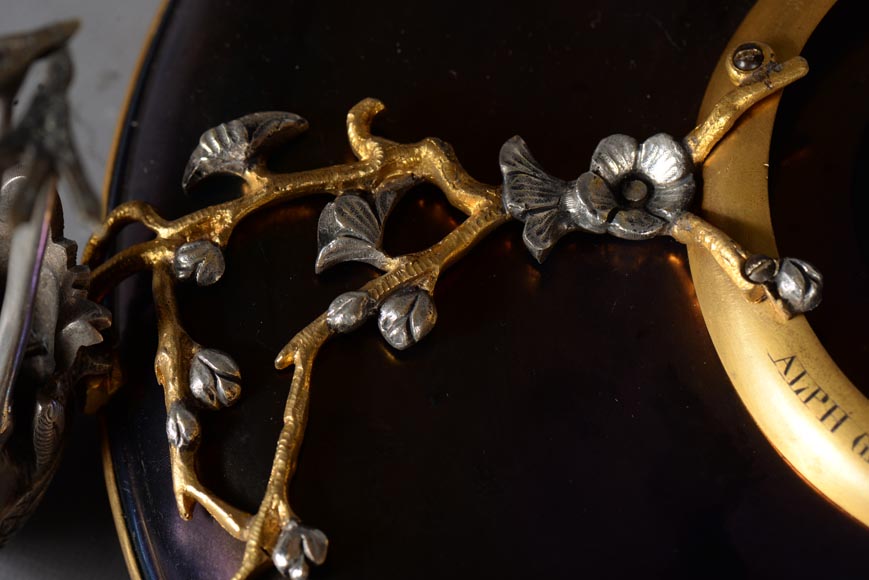 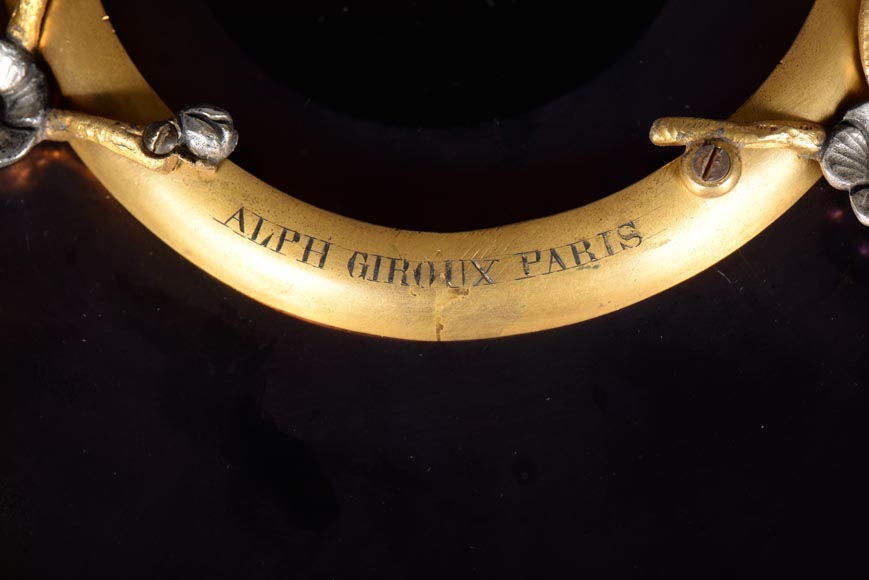 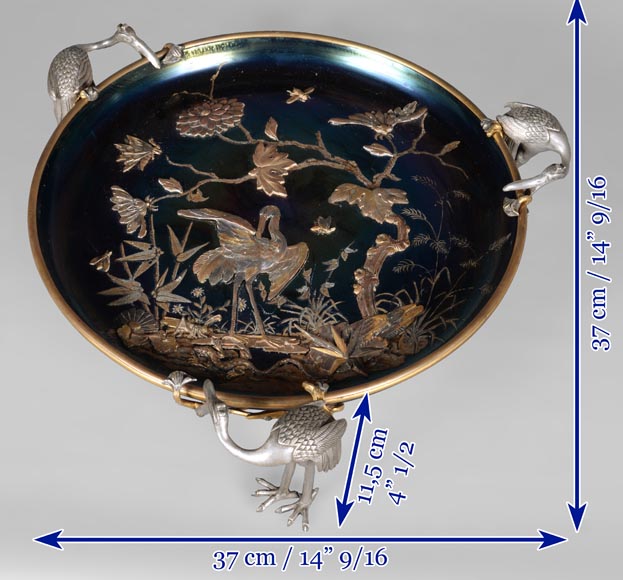 Maison GIROUX and Ferdinand DUVINAGE - Exceptional and rare cup with waders with iridescent glass and electroplated decor, circa 1870-1880

This cup made in the 1870-1880’s by the maison Giroux, as indicates the signature on the mount, is a piece extremely rare because of the material used. Indeed, few models with iridescent glass are known today.

The Japanese inspiration of the decor and the model of our cup indicate that it is a creation of Ferdinand Duvinage who takes the direction of the maison Giroux between 1867 and 1876, then taken by his widow when he dies.

This store which was originally selling all kind of supplies and small objects such as paints, varnishes, albums, writing-papers, fans, toys, boxes and souvenirs, but also lithographs, drawings and watercolors, considerably developed in the first decades of the 19th century. First, because they count among the clients, important persons such as the Duchesse de Berry, Louis XVIII or even Charles X, then by the drive given by Alphonse Giroux’s sons who joined the firm in 1833. Thus, Alphonse-Gustave Giroux, the eldest son, had the idea to sell small furniture. Even though he was an artist himself, he worked like furniture dealers of the 18th century, with artists who did not have the right to put their signature and exerted a hold over the design of the creation that he chose. He also decided to move the store in the new Opera district on the corner of the 43 boulevard des Capucines and the 24 rue Neuve des Capucines in 1855.
On this same year, the company which had already won medals for the quality of its production during previous events, sells during the World Fair, to the Impress Eugénie, a bonheur du jour, conserved today in the château de Compiègne. In 1867, the store direction is given to Ferdinand Duvinage, Harinkouck and Brune. Little things are known about Harinkouck and Brune who seem to have been associated for a short period of time as Duvinage remains the only one in 1874.
Ferdinand Duvinage (1813-1876) who seems to be cousin with Alphonse-Gustave Giroux, joins the company during a few years before taking its direction, without changing the name. He files in 1874, 1876 and 1877 patents for a marquetry technique of mosaic with metallic partitioning for furniture and art objects. His method is really original because it involves the combined union of ivory as a base, wood for the designs or ornaments, and copper or other metal to partitioning the ivory fragments. The firm continues to participate to World Fairs where they win many medals, even though they are not that much mentioned by the critics, we know that the productions with the Japanese vocabulary created under the direction of Duvinage were also very appreciated and were a real commercial success.

As said above, our cup takes the form of a very known Duvinage model, of which the decor was made with the cloisonne ivory marquetry, invented in 1874.
Here, the silvered mount, taking the shape o three waders, supports the iridescent glass cup covered with a decor made according to the electroplated method, famous thanks to Christofle. The motif of which the vivid colors are suggested by many shades created by the proceed and the painting, is composed of a wader in a very luxurious natural decor where are coexisting insects, lizard and different Japanese plants. The scene is made particularly naturalist thanks to the precision given to the many details, which are not only on the visible side of the cup but also under it. Indeed, when we turn over the cup, we can admire the splendid mount taking the shape of blooming cherry tree branches, of which the colors are again given by the electroplated proceed, joining the feet by a medallion on the center where we can read the signature. 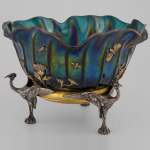 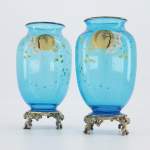 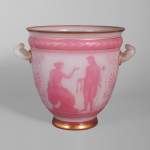 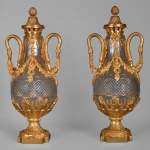 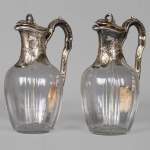 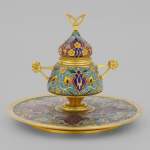 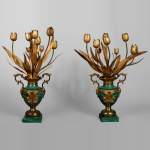 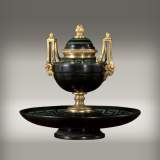