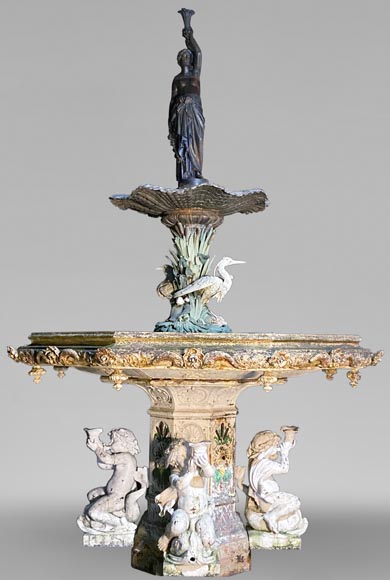 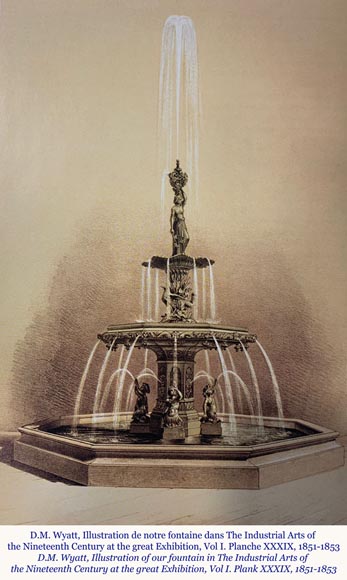 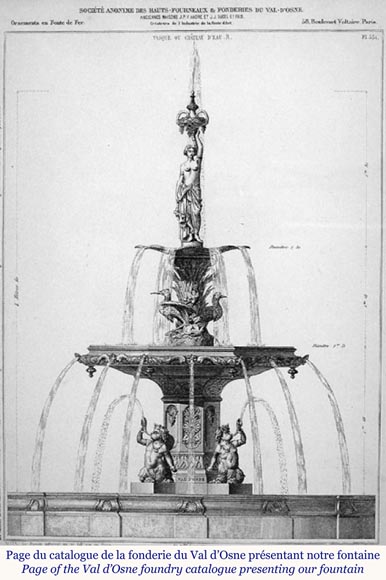 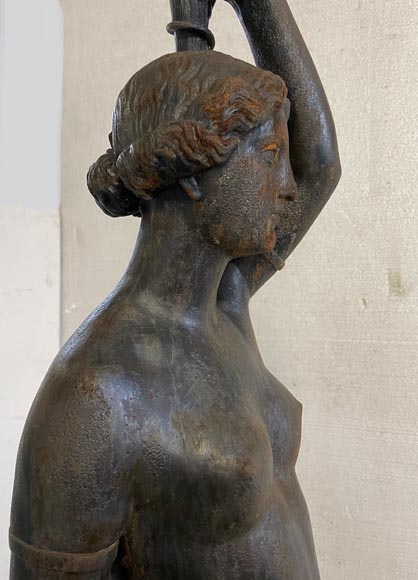 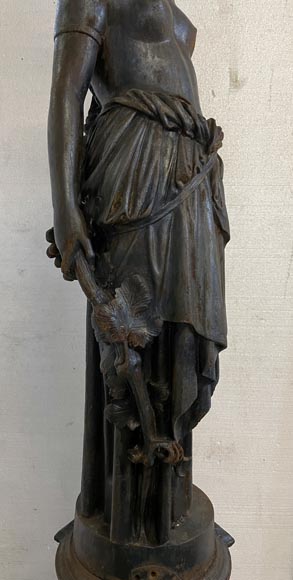 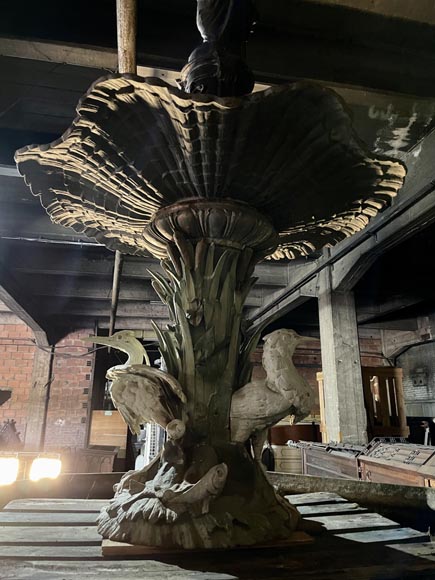 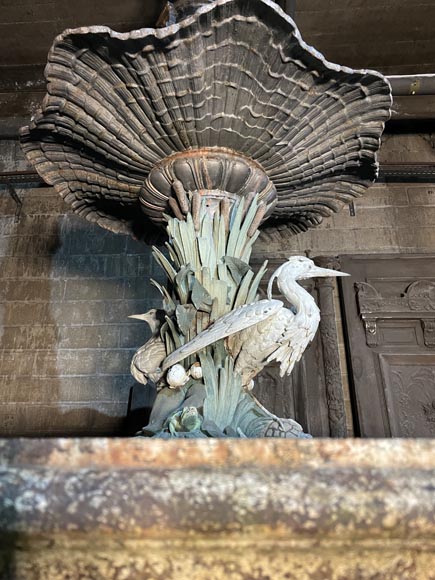 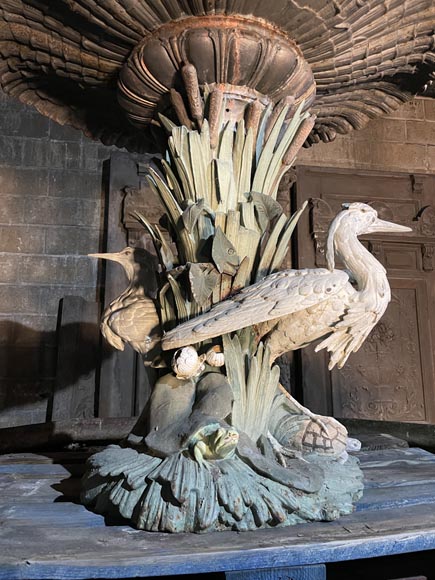 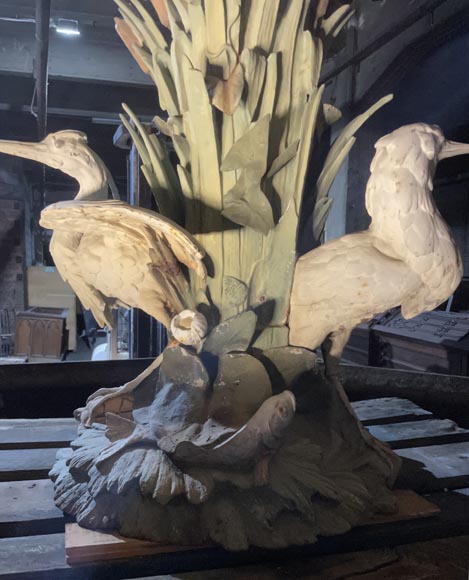 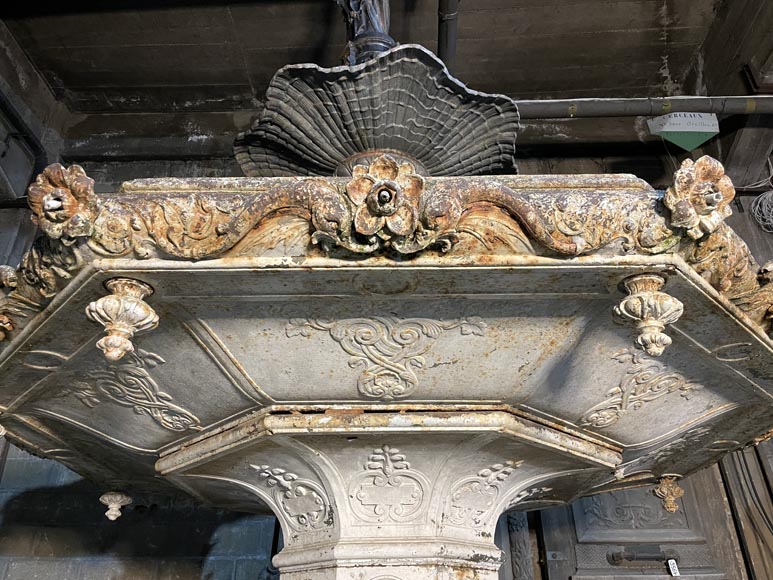 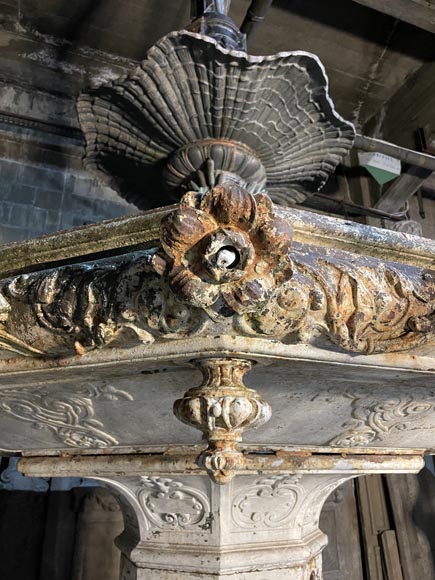 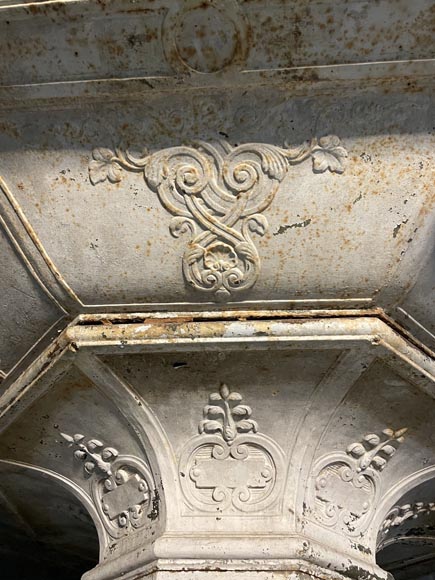 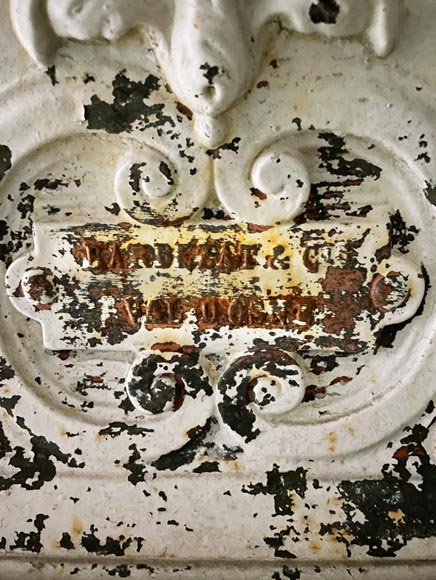 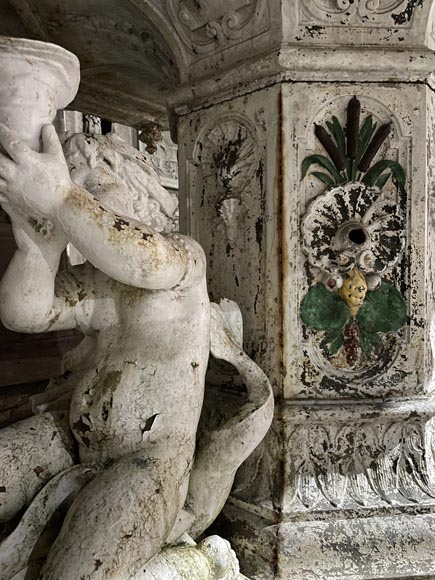 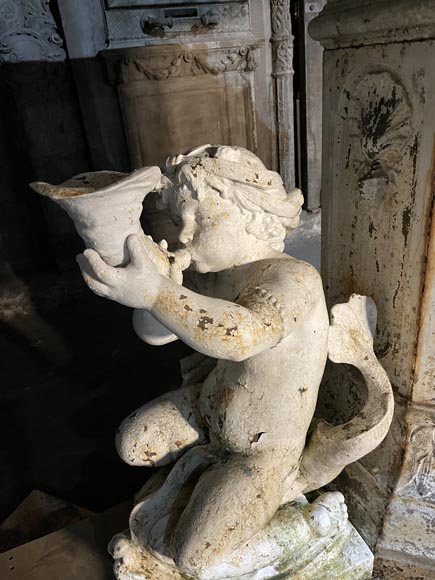 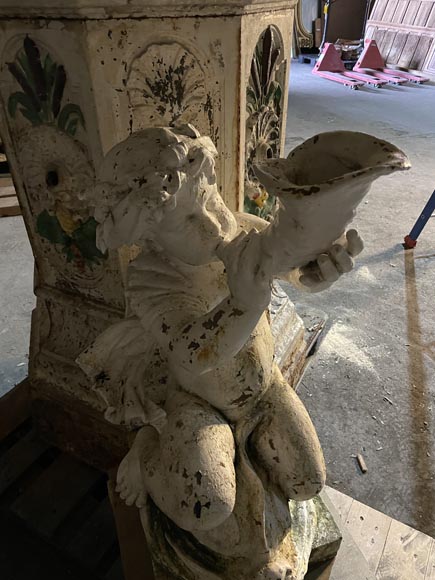 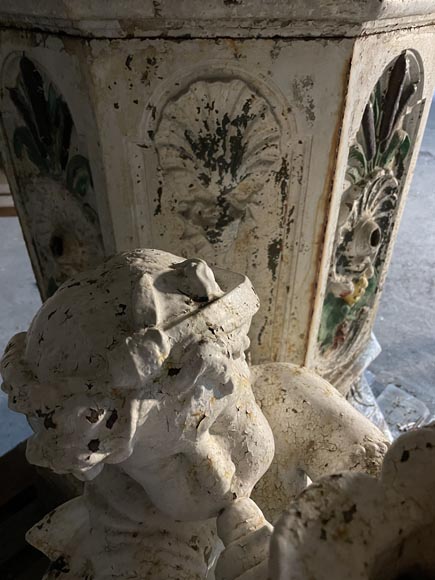 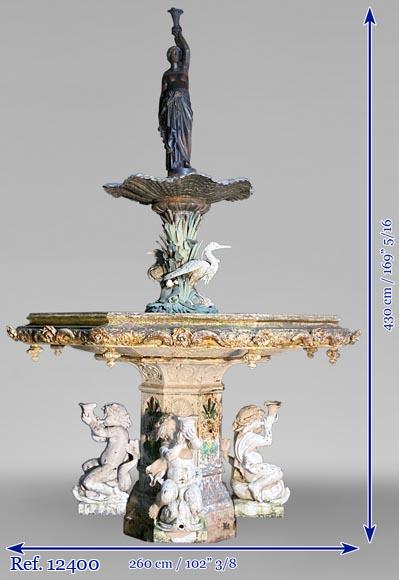 This exceptional painted Renaissance style cast iron fountain was made by the Val d’Osne foundry for the first World Fair that took place in London in 1851, where it was exhibited.
In the context of industrial revolution and free trade, the industrial exhibitions, at first national, enable to share inventions opening the future’s horizons. Thus the first World’s Fair was held in London from May 1 to October 15, 1851 at the Crystal Palace. The reign of Victoria thus demonstrated its modernity and its adherence to a liberal philosophy, where international trade would be the guarantor of peace and the flourishing of human genius. The Crystal Palace is designed for the occasion by Joseph Paxton, and built by Owen Jones. An iron and glass giant with an area of ​​8 hectares, built in a short time thanks to modern prefabrication methods, this building represents a tour de force demonstrating the progress of the industry. This architectural work of art was unfortunately definitively destroyed by fire on November 30, 1936.
A showcase of Britain's supremacy in the world economy and in industry, the Exhibition is conceived as the presentation of the products of art and industry on a very large scale in each country. The interior is divided into four sections, which were reused for the next World’s Fairs: raw materials, machinery, manufactured products and art objects. For each, national pavilions showcase their best productions and innovations. The color illustrations of Dickinson and Matthew Digby Wyatt are precious testimonies of this event, we can see on them the beauty of the place and the valuable art objects exhibited. The 1851 World’s Fair inaugurated a practice of far-reaching success, creating an artistic and technical dialogue beyond frontiers.

The participation to this first World Fair of the Val d’Osne foundry with, in particularly, the presentation of our fountain in the gigantic glass nave, gives it an international recognition. The recurrent participation to this type of events and the rewards they win each time, quickly makes the foundry the most important of France in the second half of the 19th century. Created in 1836 by Jean-Pierre-Victor André, founder of the « J.-P.-V. André » company and considered as the initiator of the decorative cast iron replacing the wrought iron, the foundry proposes urban furniture and art statues. The booming company is lead through out the years by different men until 1986, without losing its quality and absorbs many other rival establishments such as Barbezat and Ducel, permitting to enrich its catalog of models composed of more than 40 000 different objects, including the production of balconies, urban and lightning furniture but also monumental fountains, animal groups, statue and large groups from antique or classic models. To do so, the foundry had partnerships with many and important artists like Albert Ernest Carrier-Belleuse, Mathurin Moreau (stockholder in the company), James Pradier or even Hubert Lavigne, sculptor of our fountain.

Hubert Lavigne was born est né in Moselle and more precisely in Cons-la-Grandville in 1818 and died in 1882 in Paris. Student of the Beaux-Arts of Paris, he was the student of the sculptors Ramey and M.A. Dumont. Remarkable sculptor himself, he won in 1843, the Third Prix de Rome by presenting a plaster bas-relief depicting La mort d'Epaminondas, conserved in the Musée des Beaux Arts of Nancy. He also wins two medals in the Salon in 1861 and 1863 to which he participates assiduously between 1849 and 1881. He receives orders for Parisian buildings like the Palais Royal where we can find his sculpture of the actual facade of the Louvre’s Turgot wing, or even the Sorbonne’s church and the Saint-Michel fountain.
He also makes many cast iron works of art for the Val d’Osne foudnry such as agricultural representation, eagles, newts, children with conchs, etc. Prolific and talented sculptor, Théodore Véron Hubert, regrets in his book published in 1877, Dictionnaire Véron, ou mémorial de l'art et des artistes de mon temps that our sculptor was not recognized to his true merit : "And saying that after many study and conscience, many superior productions marked by an aesthetic worth of a Dumont, this eminent artist with also a noble character, that we follow since 1841, while we were drawing together (at the Lapin academy), and of whom we see the superior creations each year; saying that this truly distinguished sculptor is not yet decorated or ineligible to compete! Truly, this is to disgust of modesty and conscience!”

Then, it’s circa 1851, that Hubert Lavigne realizes the model of our Neo-Renaissance style monumental fountain for the Val d’Osne foundry. Resting on an octagonal foot adorned with shells and reeds in slight relief, the fountain is composed of a first basin with small pendants all around with pierced flowers from where the water can flow and adorned with arabesques.

On the center of this basin a beautiful decor of reeds was sculpted inhabited by a heron, a turtle and a duck. They support a second basin of the which the serpentine edges and the external ribs remind of the characteristics of a shell. This last basin receives on its center a statue depicting a woman dressed in the Ancient way with a drapery around her waist and brandishing with her left hand a cup.
Some children sat on dolphins are blowing into conchs were placed all around the base they are animated. We particularly recognize the sculptor’s scissors in their shapes which remind the one of the sculpted children on the Louvre facade.

Illustrating in the foundry’s catalog, our fountain was ordered by many other cities to decorate the squares. We can find a model in Cirey-sur-Vezouve on the East of France, another in Saint-Pierre of the Réunion Island or even of the Sao-Miguel island in Portugal. 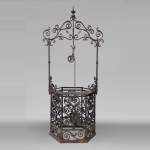 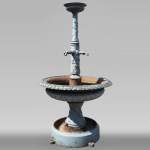 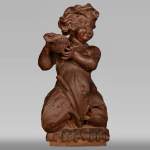 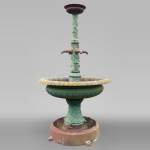 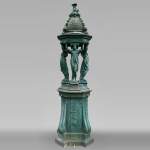 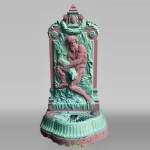 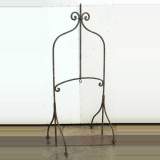 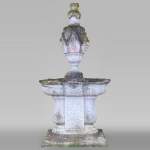 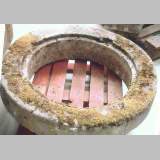 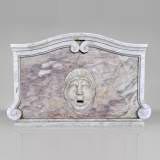 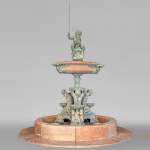 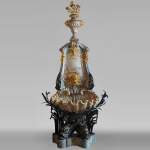