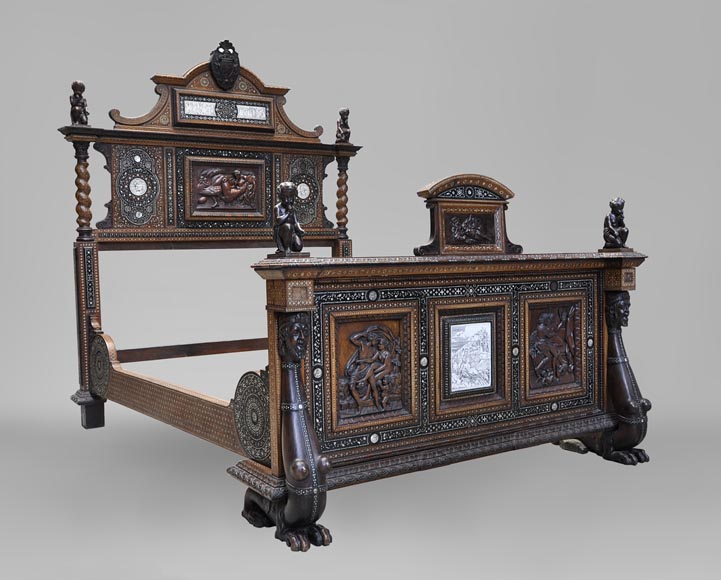 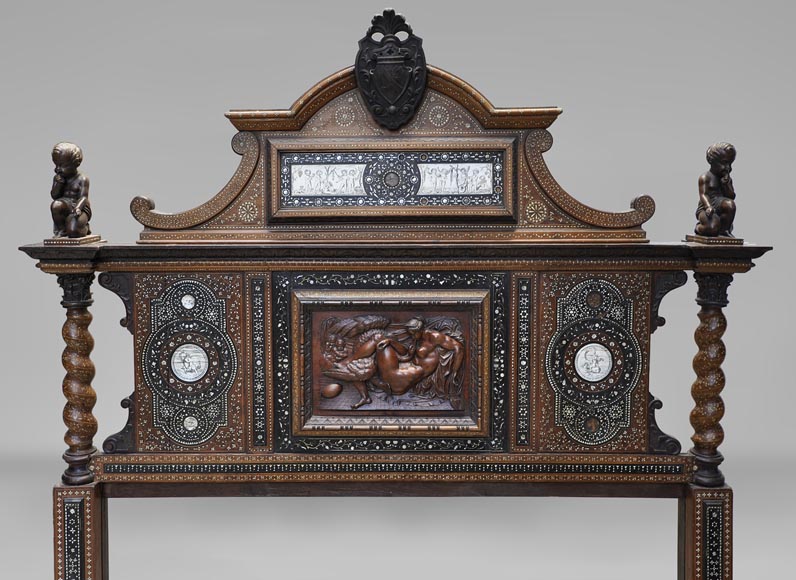 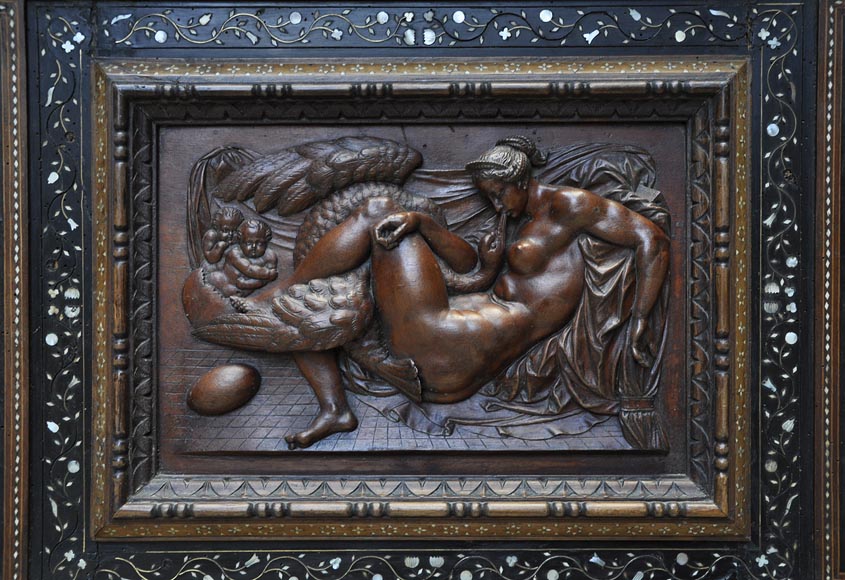 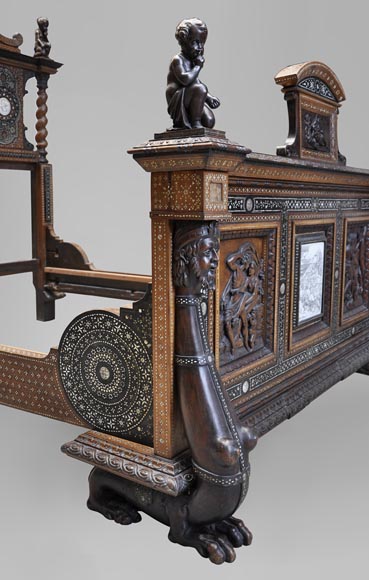 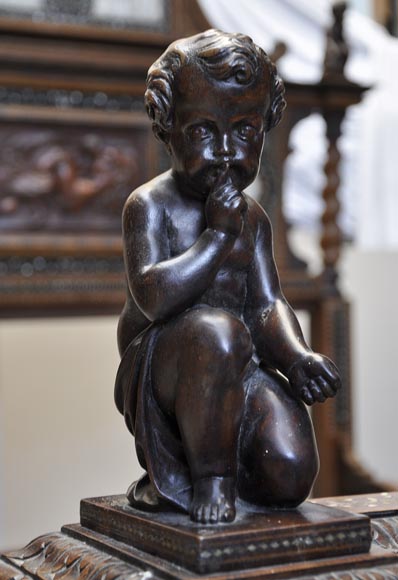 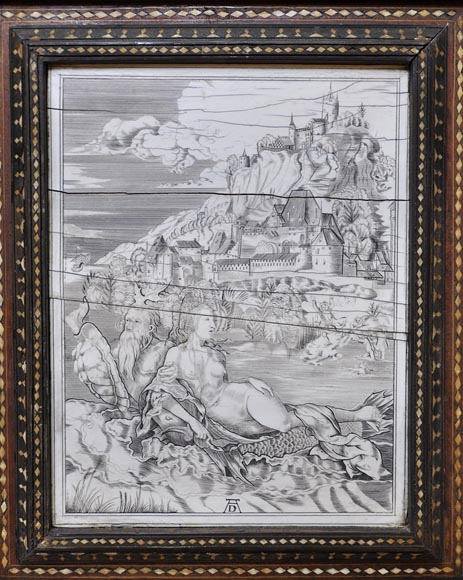 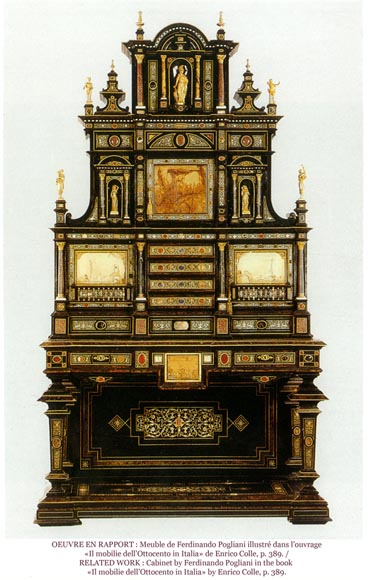 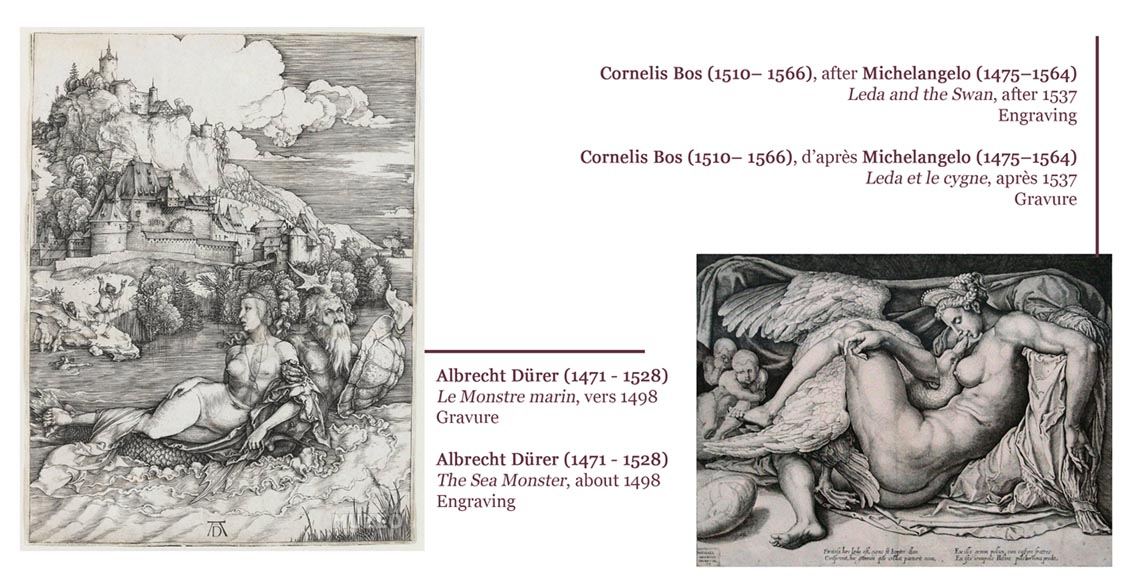 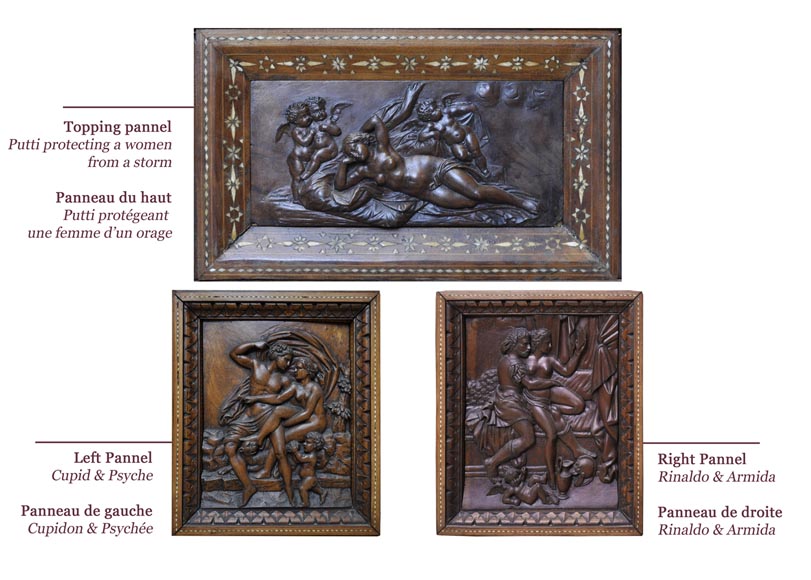 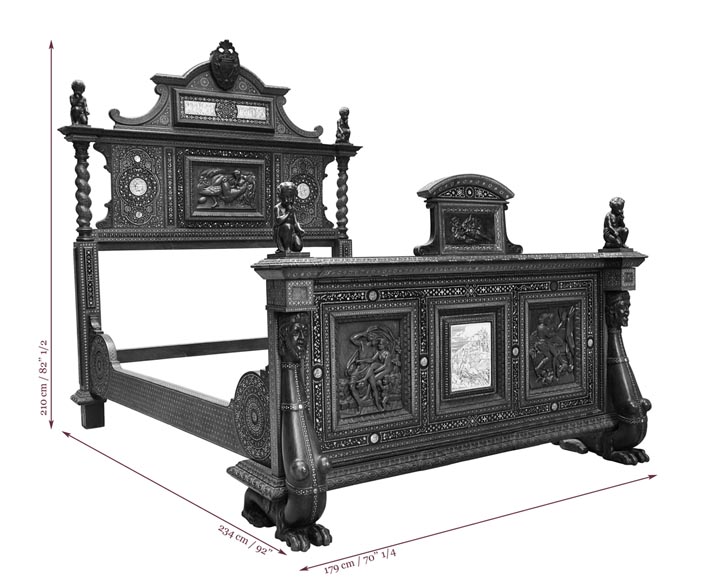 Ferdinando POGLIANI (att. to) - Rare Neo-Renaissance style bed made out of carved walnut and ebony veneer with ivory inlays

Status:
Need some restorations. Wormholes in the wood. Some missing elements in the inlays. Sme cracked decorative pannels.

Large bed of architectural form in walnut with ebony veneer, richly decorated with inlays and marquetry in geometric patterns.

The pediment headboard framed with detached twisted columns, has a central bas-relief sculpture of Leda and the Swan after Michelangelo (1475-1564), lost work known through numerous engravings such as that by the Flemish Cornelis Bos (1506/10-1555) - see slideshow.
The footboard is adorned inside with a frieze of putti on ivory topped with a carved wooden crest of a sun and a hand holding a sword. The exterior is topped with a bas-relief of a young woman sleeping and protected from a threatening storm by three cupids.
The centre of the footboard features a reproduction of the Sea Monster by Albrecht Dürer (1471-1528) on ivory plate. On either side of the work by Dürer, are two representations of Love engraved in bas-relief. On the right, the legend Armida and Rinaldo, a Muslim magician who fell in love with a Crusader. She diverts him from his mission by bewitching him with a magic mirror and retains him by means of a belt woven with feelings of love. This is the dangerous view of the passion of Love, as shown by the little angel fallen to the ground. On the left is a representation of the mythological tale of Cupid and Psyche, with the start of their relationship draped by the night. This is a positive view of Love and the little cupid bears Ambrosia, drink of the gods that bestows immortality, and which Psyche drink at their wedding. Such views of a negative passionate love or positive reciprocal love are recurrent in Renaissance art.
In each corner are crouching putti sculpted in the round, making the sign of silence.

Ferdinando POGLIANI (1832-1899) was an Italian artist cabinetmaker from Milan, to whom we owe important Neo-Renaissance creations from the period of Eclecticism, in the second half of the 19th century.
He worked with his sons Paul (1870-1913), specializing in sculpture, Giuseppe (1866-1900), responsible for the architectural design of furniture, and Carlo (1866-1932), specializing in marquetry.

His workshops, located in Porta Vittoria and via Montenapoleone, were renowned for the quality of work of woodcut, marquetry and inlay. In the Neo-Renaissance style, he found ample scope for expressing these skills. Indeed, this style allowed for richly carved decoration of characters in costume, gadroons and fantastic animals, as well as hard stone inlays and precious materials like ivory or marble. In addition, he used exotic wood inlays on an ebony background.

Adopting the Neo-Renaissance style also meant working in the Italian tradition of the luxurious creations of 16th and 17th century Florence, renowned throughout the world.
Pogliani also gained an international reputation thanks to the World's Fairs , especially those of Milan in 1871 and 1881, Vienna in 1873, Philadelphia in 1876, Paris in 1878 and Turin in 1884 and 1898. His sponsors included, among others, Emperor Napoleon III. 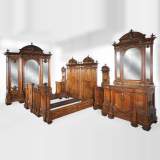 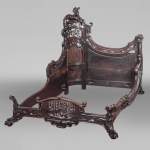 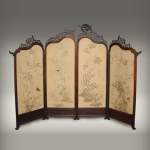 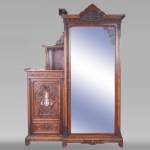 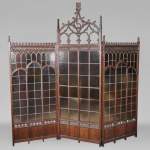 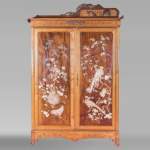 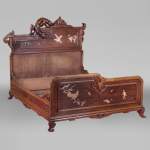 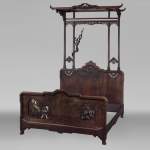 favorite_border New
A bed inspired by the Far East, decorated with a tuk-tuk (ref.11376) 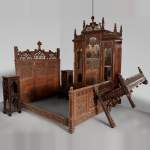 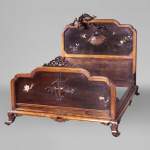 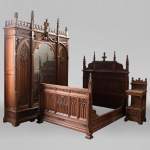 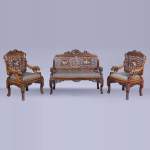