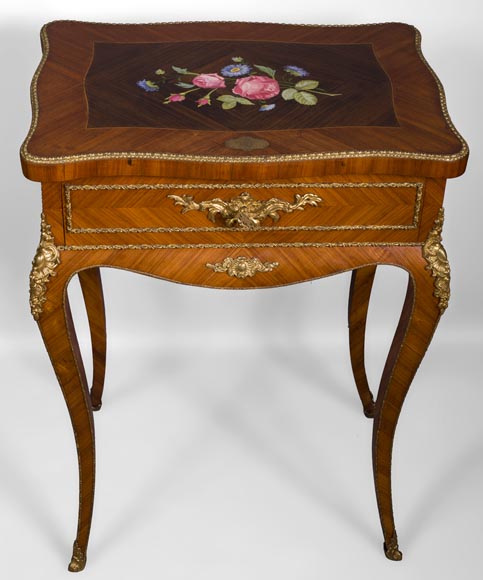 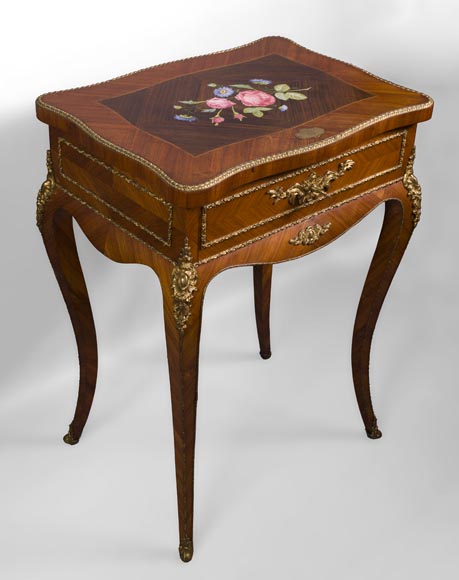 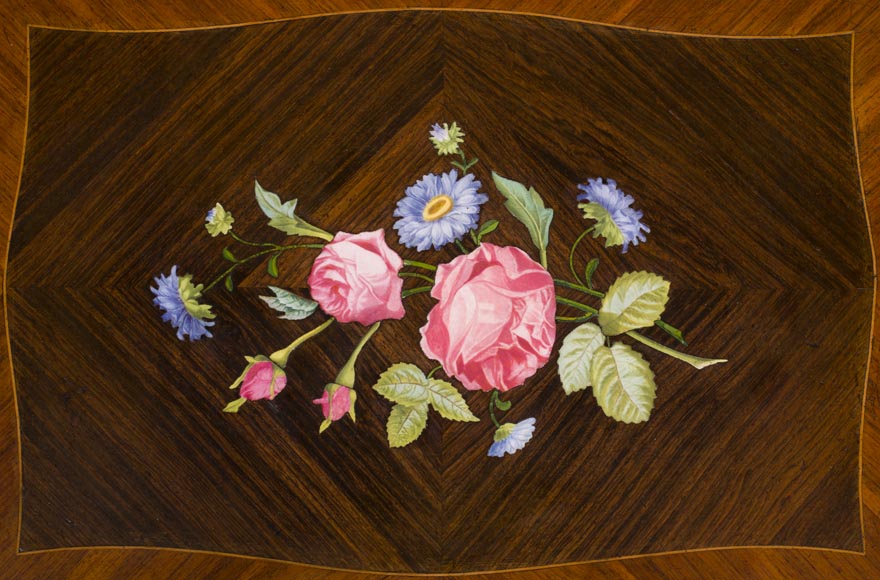 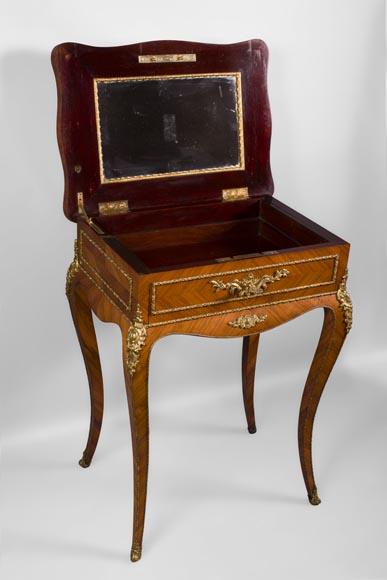 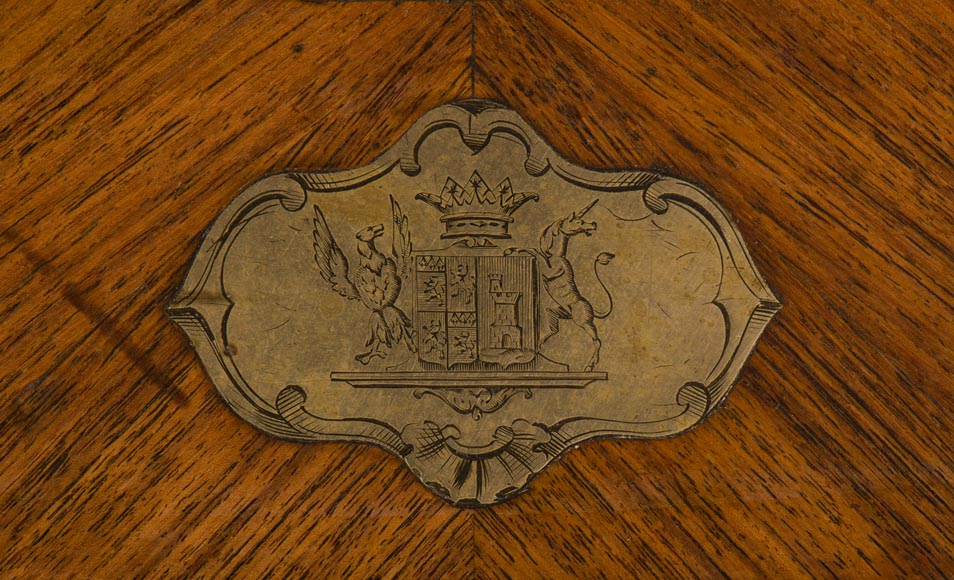 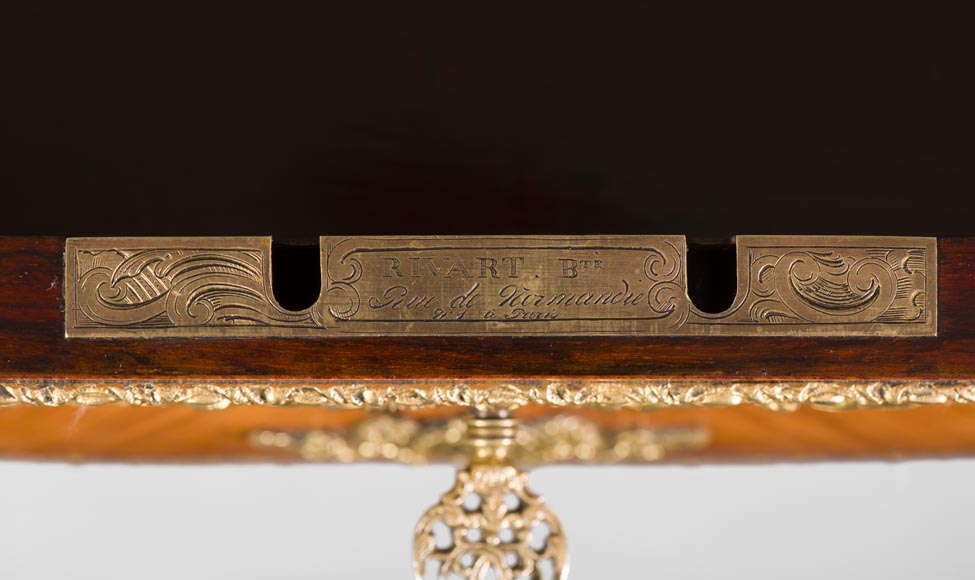 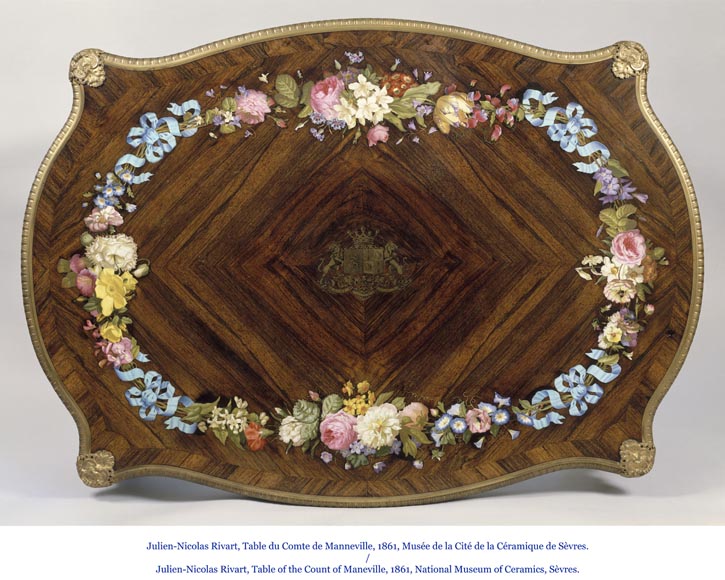 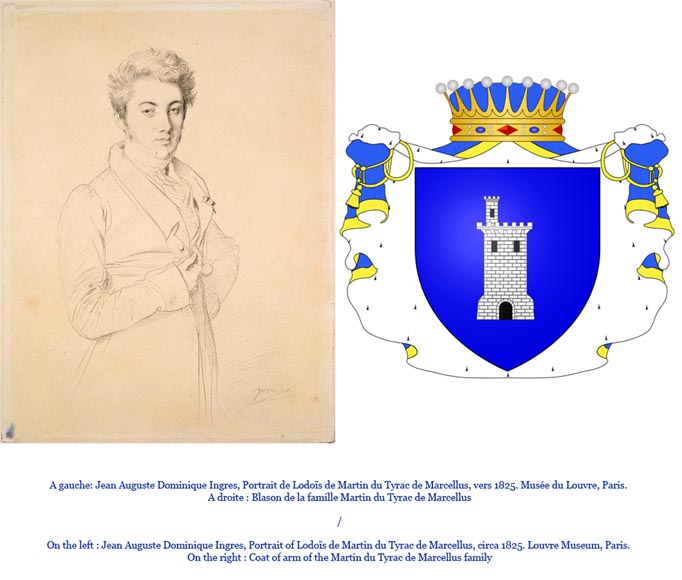 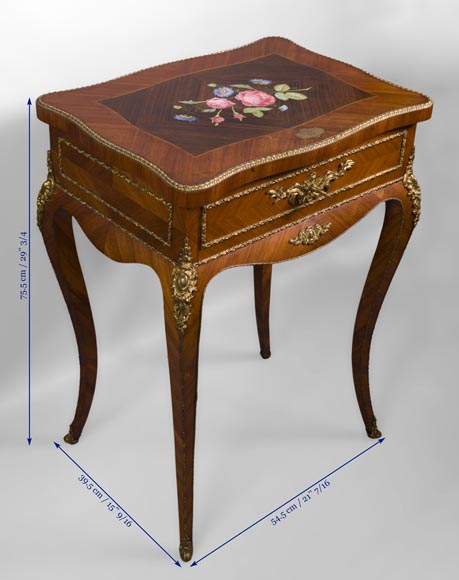 This graceful sewing table supports a rare porcelain marquetry by Julien-Nicolas Rivart , inventor of this sought after technique he was the only one to master. The mahogany shelf displays a twig of roses and blue daisies, whose vibrant colors are mutually enhancing. Porcelain inlay was not possible until 1849, when Rivart registered the patent for his unique process. Porcelain has the advantage of enabling painting, offering a range of subtle and illusionist hues, but until then, it could only decorate furniture in the form of plaques hiding the wood. Rivart's invention thus quickly found its rank in prestige furniture.

The veins of the rosewood have been skilfully arranged here on the work's exterior, while the interior is veneered with a beautiful, more intimate, shade of mahogany. The wood is also sheathed with gilt bronze laces for this elegant and feminine piece of furniture wearing wedding coat of arms. The blazons side by side, surmounted by a ducal crown and supported by a unicorn and a griffin, demonstrate an aristocratic commission.

Several pieces of furniture inlaid by Rivart porcelain were in fact decorated with the coat of arms of their purchasers, as soon as the World's Fair of 1851 , when the Duke de Caumont de la Force acquired the cabinet exhibited by Rivart and Victor Paillard and had his blazon applied to it. It is also the case of the table preserved in the Sèvres Museum of the Cité de la Céramique, having belonged to the Count of Manneville.

Here we can recognize the coat of arms of the family Martin du Tyrac de Marcellus on the right shield "à la tour donjonnée à dextre" (with a dungeon on the right side of the tower).

The most famous member of this ancient family was perhaps Lodoïs de Martin du Tyrac de Marcellus (1795-1861), a diplomat and defender of the ancient heritage who worked to have the Venus of Milo in France. The presence of the arms of his family next to another coat of arms indicates a union of two families ; thus, we have here a sewing table offered to the bride. For this reason, it is a particularly elegant piece of furniture with a sophisticated design. Its general form recalls the period of the Regency, and the aristocracy's joyful coquetry in 18th century.
The porcelain flowers, immortalizing their ephemeral freshness, are particularly adapted to decorate this type of beauty accessory. Their naturalistic precision is characteristic of Rivart 's porcelain, which was signed several times between 1852 and 1855 by Pierre-Jospeh Guérou , a flower painter formerly employed by the Sèvres Manufactory. The latter paints in the vein of Pierre-Joseph Redouté and Simon Saint-Jean, two artists celebrated for their precision that does not however suffocate the lightness of their subjects. Guérou sent his flowers on porcelain and watercolors to the Salon from 1836 to 1866, but in all likelihood, he did not always sign his decorations for Rivart. 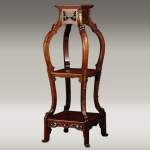 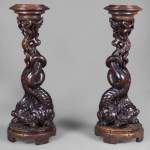 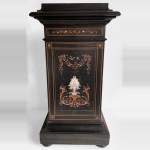 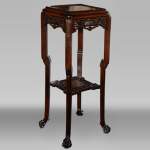 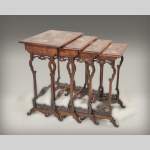 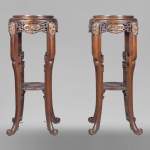 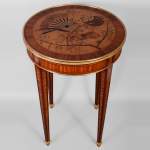 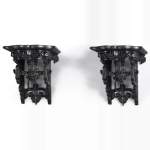 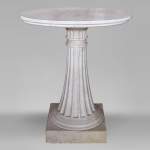 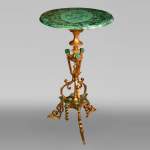 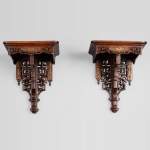