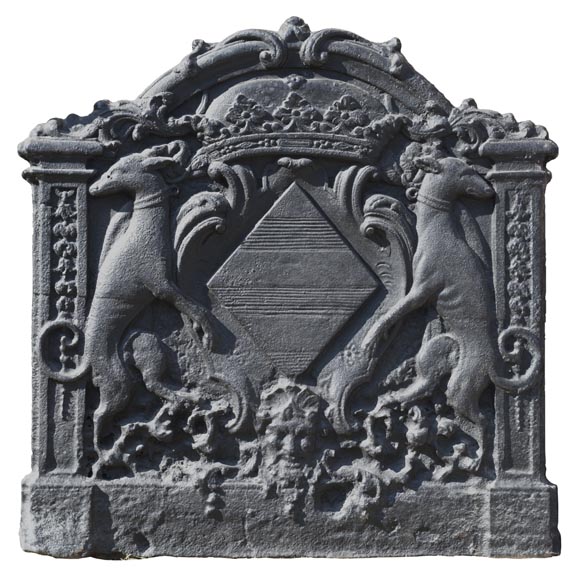 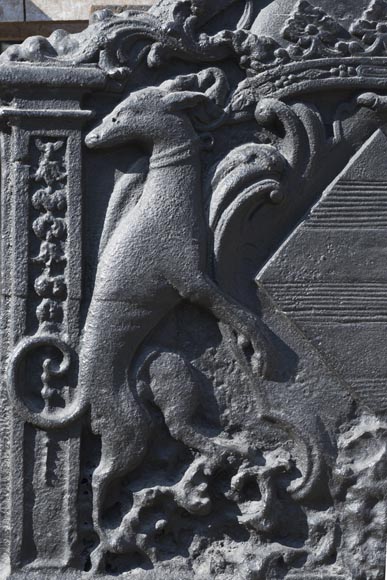 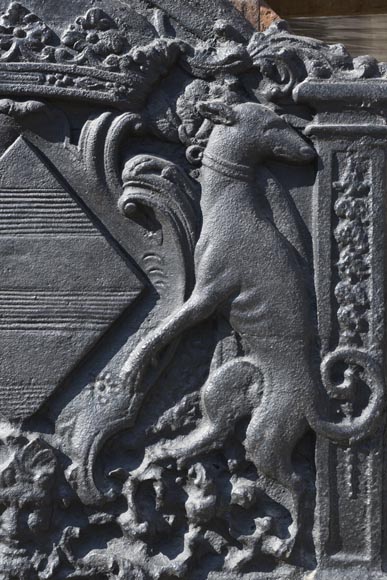 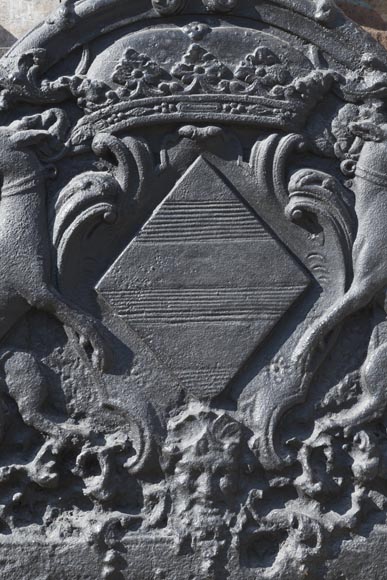 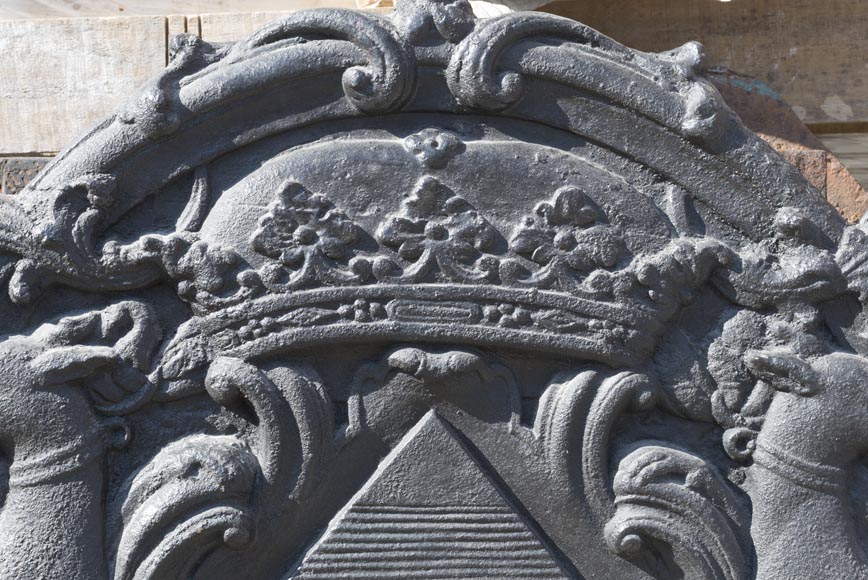 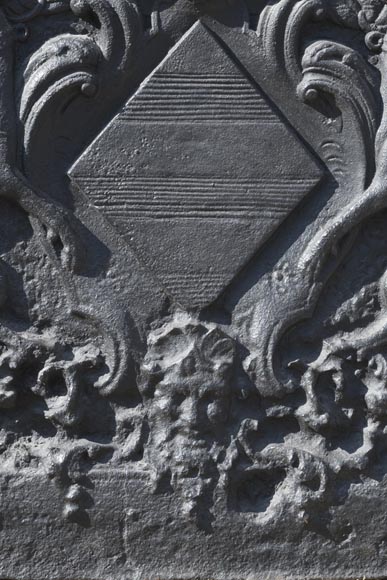 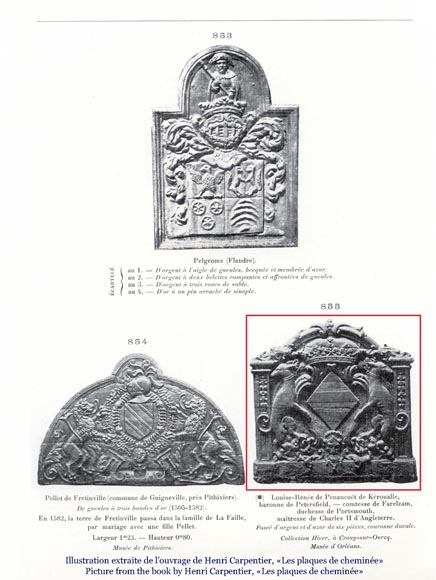 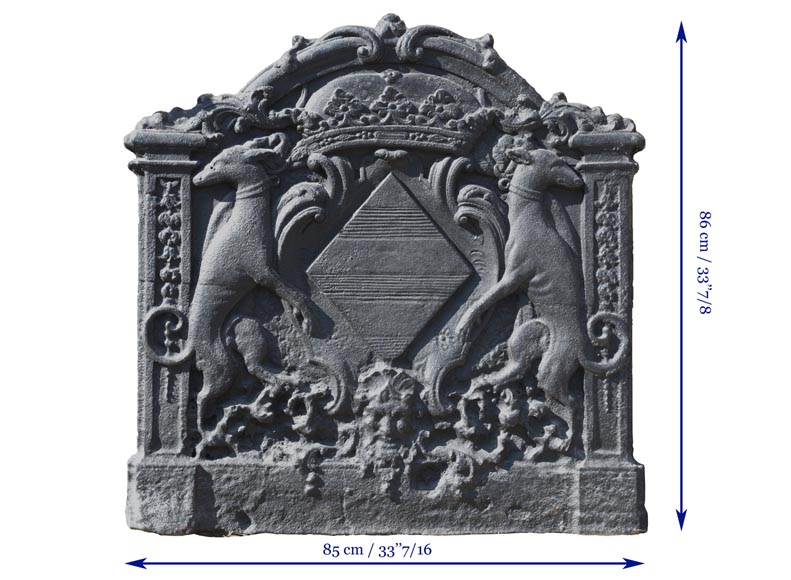 This antique cast iron fireback, made after 1684, is decorated with the arms of Louise-Renée de Penancoët of Kéroualle, Baroness of Petersfield, Countess of Fareham, Duchess of Portsmouth. Two greyhounds flank a diamond ""fess argent and six coins azure"" topped with a ducal crown. The point of the diamond rests on a mascaron representing a bearded man wearing a crown among curlicue foliage. The carving illustrates a delicate and vigorous craftsmanship. The high relief of the sculpture, the manner in which the tails of the hounds and the volutes of foliage overflow their rightful frame, make for a very lively composition.

Louis-Renée (1629-1734) was the mistress of Charles II of England for some 15 years and was equally a secret agent for King Louis XIV of France. Saint-Evremond said of her “the silk ribbon that she wore at her waist united France and England”. Born in Brittany she lived a simple life in the family Château of Kéroual en Guilders. Noticed by the Duke of Beaufort, grand master of navigation, who courted her in vain but promised to get her an appointment as lady-in-waiting to the Duchess of Orleans, the sister in law of King Louis XIV. He kept his promise post-mortem. Indeed in 1668, Louise Renée arrived in Versailles to serve Madame who was also the sister of Charles II of England. Louis XIV saw Louise Renée as a useful diplomatic asset. She set off to England as lady-in-waiting to Madame who was visiting her brother. Charles II had little sympathy for France and even less so for its King, but he loved women, of which Louis XIV was fully aware. The reception in Dover in honor of Madame was extravagant and Louise Renée attracted the eye of Charles II. The Treaty of Dover linked the two kingdoms: Charles II officially converted to Catholicism and receives the sum of two million crowns from Louis XIV. Both Kings would declare war on the United provinces and share the conquered provinces. Madame offered a jewel to her brother to thank him for his gifts and Louise-Renée was the messenger; as she handed him the gift, the King took her hand and is said to have declared : “This is the only real jewel I desire.” Upon her arrival in Versailles, Louis XIV sent her directly back to London where she was expected.
She lived in a huge apartment in the palace of Whitehall where the King visited her every evening. She was officially made Lady-in-waiting to the Queen of England in 1671. In 1672 she gave birth to Charles Lennox, duke of Richmond and was granted an annuity of 138 000 pounds, the titles of Duchess of Fareham, Baroness of Petersfield and Duchess of Portsmouth. Her influence lasted 15 years until the death of the King in 1685. In 1684, on the request of Charles II, Louis XIV made her Duchess of Aubigny and Peer of France. This same year she acquired the Château of Trémazan (Finistère) which she linked to the lands of Kéroual. Louis-Renée died in Paris, rue des Saints Pères on November 14th 1734, having lost most of her fortune. 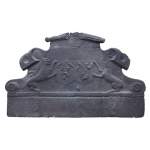 favorite_border New
Antique fireback with lion and deer from the 17th century (ref.12406) 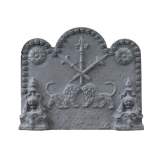 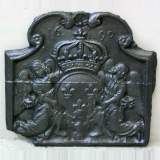 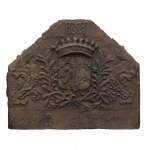 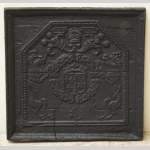 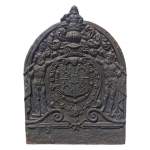 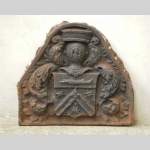 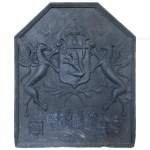 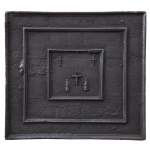 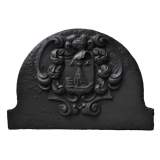 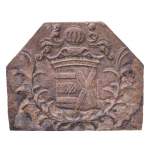 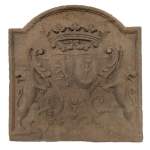