This unsigned mode, was very likely made by the French sculptor Jean Gautherin (1840-1890) for his participation to the contest opened on the 19th of July 1882 for the realization of a statue representing the 14th century provost of the Parisian mercants, Etienne Marcel. This new procedure for public order, through a competition, answers to ideological imperatives of equality between artists, promoted by the newly regime. Artists had to propose an outline answering the competition’s design brief, in which it was specified that the sculpture must be an equestrian one, of Etienne Marcel, measuring 13’1’’ (4,50m), and planned to be located in the square de l’Hôtel de ville, in front of the Seine. No less than 74 sketches at one tenth of the full-scale statue were proposed to the jury on December 5th, amongst them those of the sculptors Jean-Antoine Idrac (1849-1884), Emmanuel Frémiet (1824-1910), Laurent Marqueste (1848-1920), or even Jean Gautherin (1840-1890). After some days of exhibition, the first three sculptors aforesaid, Idrac, Frémiet and Marqueste, were chosen by the jury as finalists and asked to deliver a third of the full-scale model before six months. Idrac wins the competition, having added to his proposition a sword, held by the blade, in the right hand of the sculpture. This gesture of defense, associated to the law reform, might indicate that the dauphin Charles must accept the people’s will, or else to prepare himself for him to take up arms. This equals to pass the responsability of the violences perpetrated during Etienne Marcel’s rebellion to the dauphin, meanwhile the moral responsability of the Parisian Provost of the Merchants in the 1358 violences was at the same time the main obstacle to him joining the republican Pantheon. It is probably this symbol of acquittal that led Idrac to success. However, the latter died in December 1884, before having executed the sculpture for the Hôtel de ville. The final statue is thus ordered to Marqueste, also finalist and friend of the latest, who had specified in his testament that Marqueste was to perpetuate the execution of the statue, finally unveiled on July 15th, 1888. Some models realised for the competition have been preserved until today. One of them is owned by the Musée des Arts Décoratifs of Paris : it is the painted plaster of Emmanuel Frémiet’s proposition, donated by the artist in 1905. Two others are stored in the Musée des Beaux-Arts de Paris in the Petit Palais : a wax model by Marqueste, and Idrac’s bronze model for the Hôtel de ville, which plaster model is owned by the Marc Maison Galery. This wax model that we are presented here is not signed but attributed to Jean Gautherin. His proposal, very often mentioned in the newspapers of that period for its quality, was judged as a potential finalist. Even though it was not, the sculptor was still called to make other works of art for the Paris city hall. It represents a man riding a horse, dressed with bourgeois clothing from the 14th century. He is surrounded by two men walking next to him and holding the horse. It is obvious that this wax sculpture is one of the models presented in 1882 for the Etienne Marcel’s monument competition, with the detail of the law reform we can see in his right hand. Thanks to the few but important press articles published at the time of the sketches exhibition, some other names than those of the finalists are known. Jean Gautherin’s name is one that is frequently quoted, especially according to the artistic quality of his proposition. Thus, after studying the known works of this sculptor, and in particular those ordered for the Parisian Hôtel de ville, it seems rather relevant to attribute this piece to his chisels. 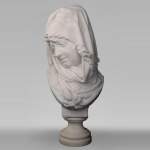 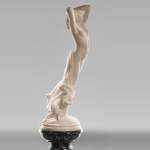 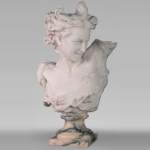 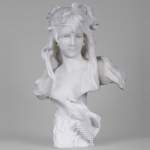 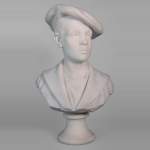 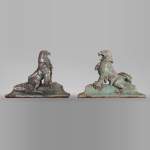