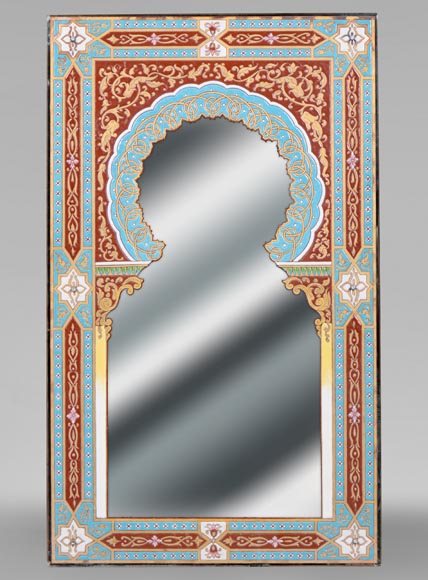 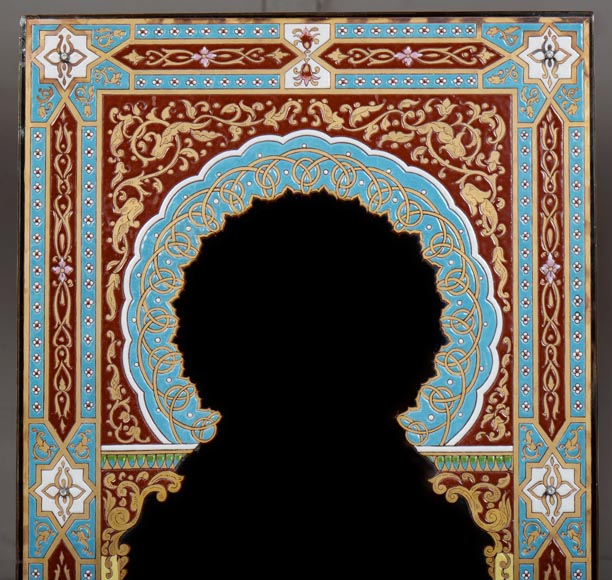 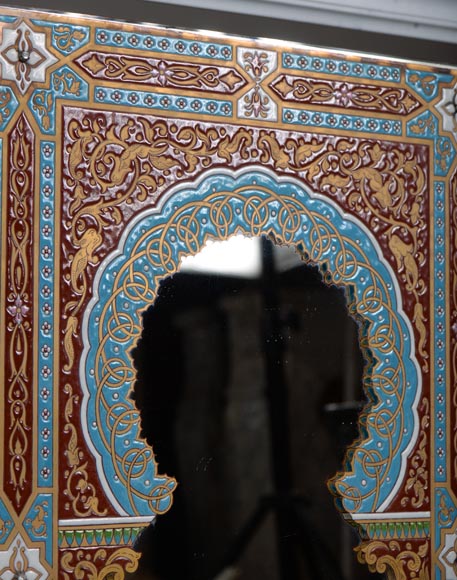 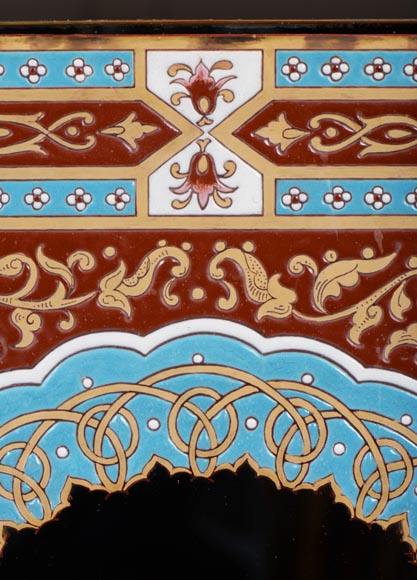 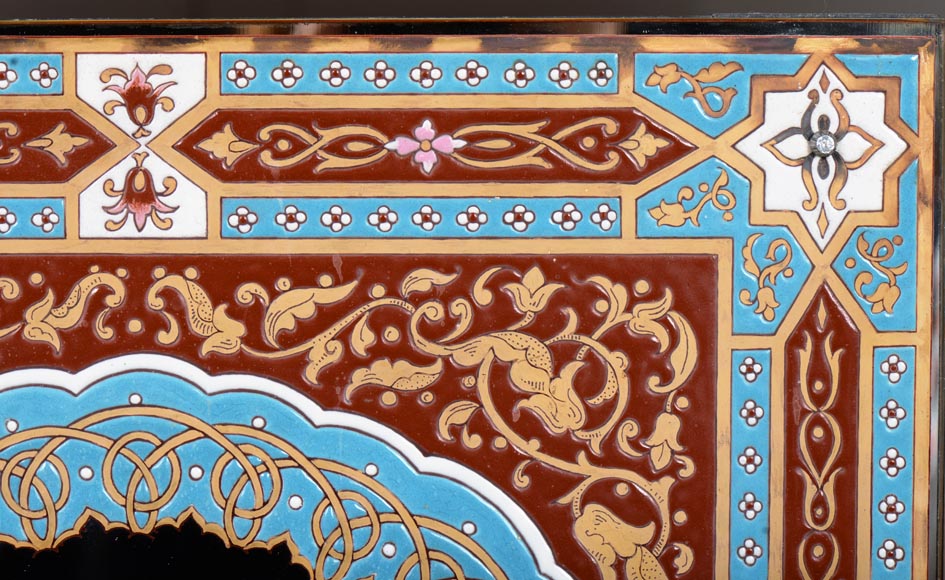 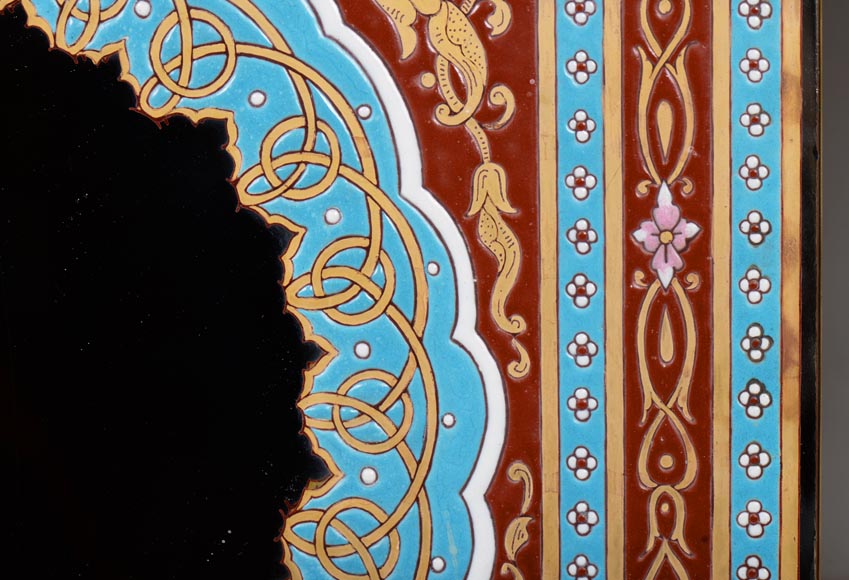 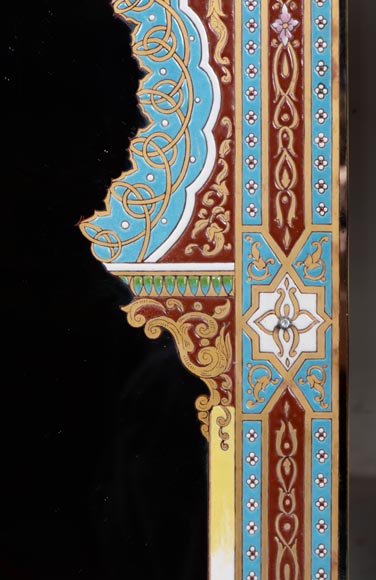 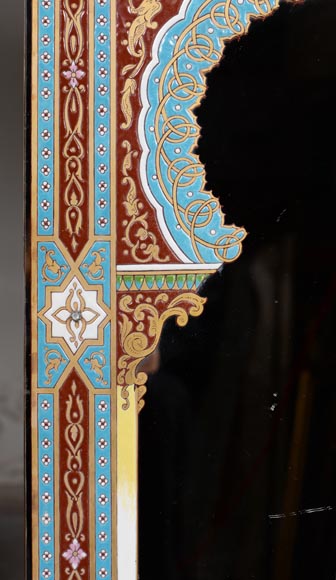 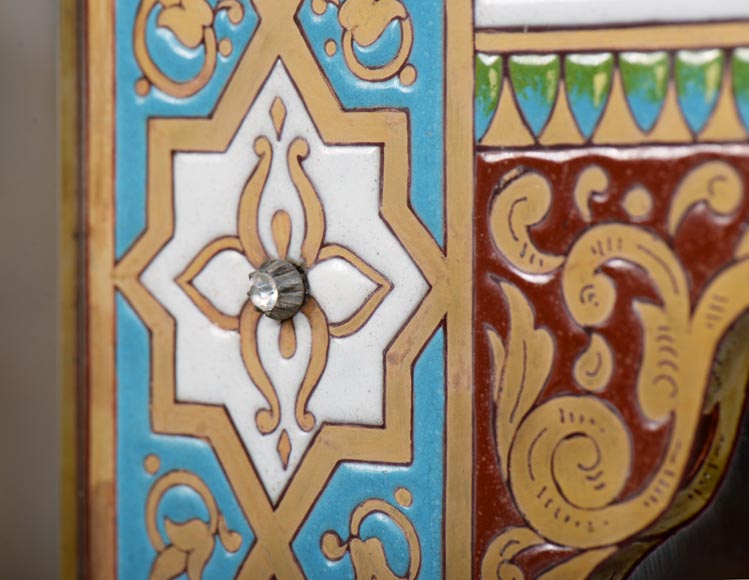 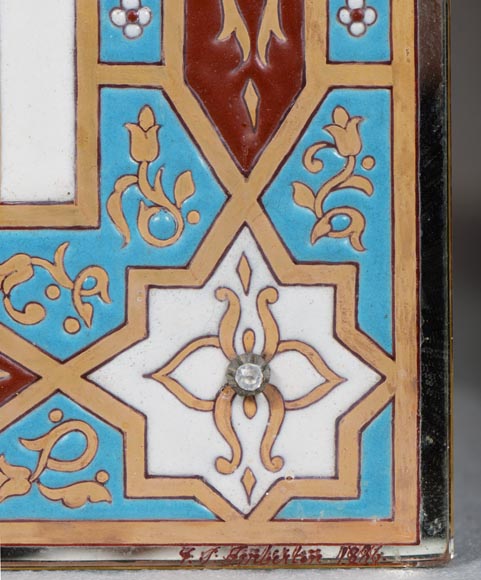 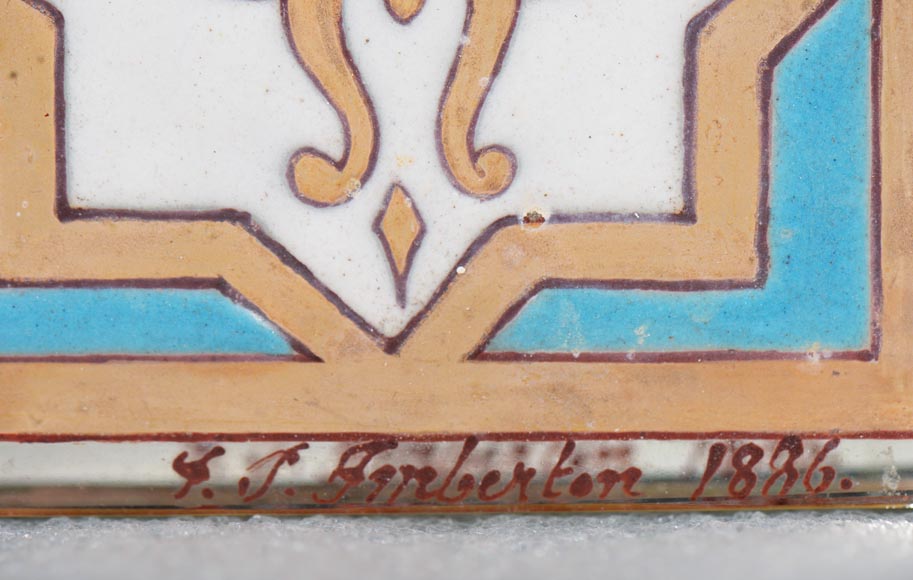 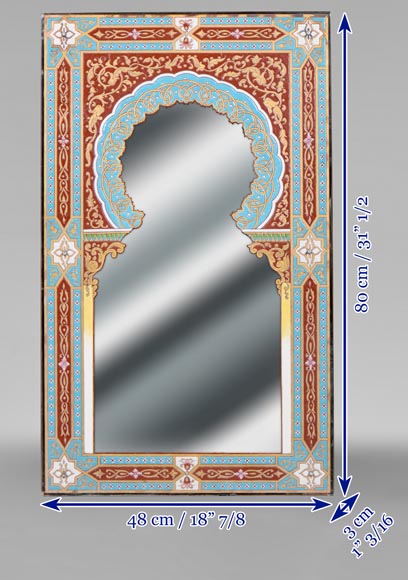 This superb mirror with polychrome enamel decoration is an exceptional piece inspired by Nasrid art, representative of the architectural and decorative forms of the Alhambra Palace.

Mr. Philippe Imberton is, at the present time, the king of enamel; he sows it on the glass, with a prodigal and brilliant hand, early by large plates, sometimes by light veins, but in such a way as to always produce the happiest decorative effects.
Article by Louis Enault in La Presse, published on September 25th, 1884.

The geometric and vegetal patterns are a real innovative achievement in the glass enameling industry. Arranged on a rectangular mirror, the enamels are elegantly composed and colored to form a Nasrid-inspired decoration, representative of a Mudejar architecture, and manifesting the cultural and artistic exchanges in the Iberian Peninsula in the 12th and 16th centuries. The outline of enamels in the form of a horseshoe arch is a typical element of Arabic-Andalusian architecture, visible from early Christian churches to converted mosques.

The horseshoe arch is supported by very thin columns with a concave base and molded rings, a unique type of column that appears only in the Alhambra Palace and indicates the passage to a sacred or royal place. The capital is divided into two bodies, the first of which is cylindrical and has a voluptuous floral decoration. Above, a prism decorated with a plant frieze with a rounded base delicately curves the whole mirror.

The talent of the enameler is rendered by the richness of the polychrome ornamentation of the vegetal patterns, notably by the arabesques of the polylobed arch, that is to say small contiguous arches, each ending in a pointed arch, also polylobed. These arches also evoke the muqarnas vault, one of the most impressive decorative elements among the ornamentation used in the Alhambra. The alfiz, the frame that surrounds the outside of the arch, is decorated with intricate bands of red and yellow floral filigree.

The entire portico is framed by regular and harmonious friezes, decorated with vegetal motifs and structured by lines of small white flowers. Six wild pomegranate flowers, also known as balaustes, are framed on a white enamel background by the eight-pointed star, a recurring figure throughout Islamic art. The flowers are slightly open and accompanied by small pomegranate seeds, a connotation of fertility and the literal symbol of the city of Granada, where the Alhambra is located. The decoration is also characterized by four mirrored fleur-de-lis, as if to express the meeting of the two monotheistic influences in Granada. We can see the extent of refinement in the detail of the rhinestone fixtures that attach the glass mirror to a wooden support.

While the representation of human figures in Muslim art is prohibited, the reflections of faces in the mirror naturally thwart the ban. One can read in an article of the Arts Industriels, published in La Presse on September 25, 1884, some lines notifying a mirror preceding ours: It will not displease the women either to find themselves beautiful by reflecting their fresh faces in this pretty oriental mirror, whose marvellous framing joins the charm of the motive to the splendour of the colorings.

The dynamic ornamentation finely worked highlights the Arabo-Andalusian influences of a lush vegetation, stylized with flowers and polychrome arabesques. The structured yet dreamlike appearance of the decoration gives this mirror a solemn and majestic look, adding depth to the silver-covered glass piece. The lines of the polylobed arch are characteristic of Ottoman architecture, as well as the use of vegetal motifs decorated with interlacing, geometric or floral networks. The complexity of the cloisonné enamels, a real innovation for the time, confirms the mastery the glassmaker.

Philippe Imberton affirmed his audacity and originality when he exhibited a remarkable oriental kiosk in the center of the great nave of the Palais de l'Industrie in 1880. He brought together all his savoir-faire, all his applications of enamel on different objects and supports. His stand presented numerous novelties such as stained glass enamel and enameled porcelain, a very successful attempt and "to which we believe a great future".

Originally from Portugal, Jacques-Philippe Imberton was a glassmaker, enameler and inlayer of first rank, recognized for his tireless research in the production of enamels on glass. He participated in the revival of the polychrome enameled glass industry in the 19th century, in which he was the inventor of a new enamelling process on glass that took his name.

After a period of oblivion linked to the decline of the seventeenth century, the multitude of enamelled glass pieces exhibited in 1878 at the Paris World Fair, including notable pieces by Philippe Imberton, contributed to the rediscovery of enamel on glass, as well as the Ottoman motifs which became a source of inspiration for Western ceramists. He worked in 1882 at Bucan and Duponthieu and realized some projects for the Appert brothers in Clichy. Between 1878 and 1891 he set up his workshops at 21 rue Rochechouart in the north of Paris, as well as a store at 38 boulevard des Italiens. He quickly developed an original style of his own, notably by the persistent use of turquoise blue and by his mixture of enamels, cloisonné with gold or vitrifiable colors, favored by a special composition that he applied by hand. The pieces are then blown and heated until the enamel is completely fused to the glass. His technique of enameling glass makes his pieces true works of art "with a sparkling and fragile substance", as much by the purity of the forms, the delicacy of the ornaments as by the richness of tone.

At the head of modern enameling, P. Imberton is distinguished by the rare and precious quality of his solid enamel and is thus closer to the great oriental artists. Indeed, the energetic sharpness of his colored enamels recalls the wonders found in the mosques of Cairo, Damascus or Constantinople, of which he will undertake some reconstructions of Arab masterpieces. Sometimes in the taste of the Renaissance, or in the Byzantine or Persian taste, he develops a new process of application of enamel on stained glass windows of the most original, where the enamel forms on the glass of brilliant laces, of an original design and an incomparable brightness. Some of his pieces are true specimens of luxury glassware, some of which are kept at the Corning Museum of Glass and the Museum of the Conservatoire National des Arts et Métiers. In 1884, he donated to the Conservatoire National des Arts et Métiers a collection of samples showing the successive stages of his technique of applying enamels to glass. His innovations, as well as his curiosity, earned him notable success at the Universal Exhibitions in which he participated, including those of 1878 in Paris, 1884 in Amsterdam, and 1888 in Barcelona, where he was awarded gold medals. 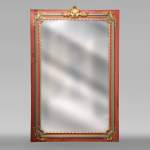 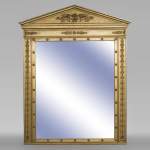 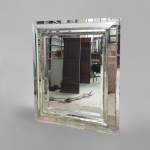 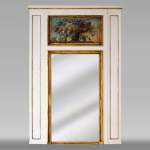 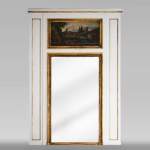 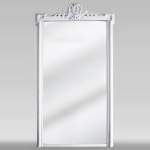 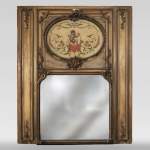 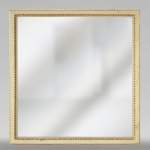 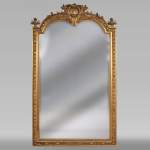 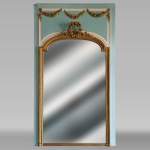 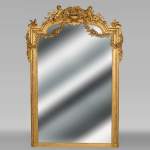 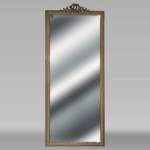